Today was changeover day and we all know that means Supercells, Tornadoes and extreme weather and today was no different. We left DFW Around 11am and with just 1 guest coming in today and the other 2 cars full up we arranged to chase around an area near Wichita Falls and meet up with Arron and Ashleigh later on.

We got to Wichita Falls for some lunch around 2pm and a Tornado Watch was issued pretty much at that time, a few disorganised cells were NW of Wichita Falls so we kept a close eye on these in case they became surface based and were about to start the main event.

After lunchtime it became clear that this was indeed happening and we headed North on I44 and crossed into Oklahoma and stopped just east of what was a HP Supercell near the town of Grandfield.

This Supercell was Tornado Warned for most of the time we tracked it but with zero visibility we headed back east and south for another Supercell coming up from Wichita Falls and this one looked much more Classic in appearance, almost instantly it went Tornado warned so we sat and waited just north of the red river crossing further east from Wichita Falls, as it approached it looked stunning with a strongly rotating wall cloud and insane Cg Lightning out of the anvil. I told our guests at least 5 times it would be a good idea if we got into the car whilst the bears cage barrage passed but unfortunately a few of them decided it would be fun to play chicken with Ma Nature. End result was a huge Cg strike only a few hundred feet away smashing into the power lines just to our left, that certainly made them retreat into the cars. Structure at this time was stunning. And the radar looked amazing as well showing strong rotation.

Below : Radar at this time denoting strong rotation. 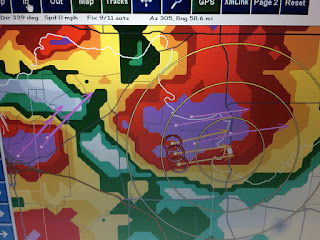 After the above pictures were taken we evaded the baseball size hail and moved about 5 miles further south and sat on the bridge of the Red River just south of the town of Terral (Ok) and watched a few funnel clouds moving to the ENE, But then the storm started to look like crap and after a quick phone call from Arron saying he was only 20 miles away down Highway 287 we decided that was enough of this bonus chase day and went to meet up, of course you just know what happened next.............zzzzzzzzzzzzzz

The above Supercell turned into a tornado machine dropping around 5 tornadoes just around where we were sat, 2015 really is making it hard for me this year, always on the best storms but always leaving them for them to turn into tornado producers, luck surely has to change soon!

We met with Arron and stayed in Decatur for the night which was eventful in itself as well with a tornado warned storm headed straight for us from near Mineral Wells but that passed safely to our south in the end.

SPC Reports Below for this day