Today would be one of the top 4 chase days of the 2015 Season. We awoke in Childress and headed to Shamrock for Lunch. We were joined by Craig Hilts a Canadian Chaser who I first met last year at Limon and he said he would be out and about today and we should hook up where and when we could. We had a chat over lunch and both our target locations were spookily the same place "Canadian" in the Texas Panhandle.

The first signs of Towering Cumulus along the Dryline were spotted to our North West and so it was northbound we both went, as we headed nearer to Canadian our towers were now showing the first radar blips of the day and explosive developments were under way, we continued north through Canadian and we then took Highway 87 just north of town, we went another 7 miles and stopped in front of a Beautiful rotating Classic Supercell, A wall cloud quickly formed and sporadic golfball hail started falling, rotation picked up even more and it wasnt long before Tornado number 1 of the day was about to touch down, we had a perfect position just east of the hook and we had no cause to move. The Supercell then did a left split with that careering northbound towards Kansas whilst our Right Split stayed Stationery, this was to be the theme of the day with this Storm moving 6 miles in the next 7 hours. 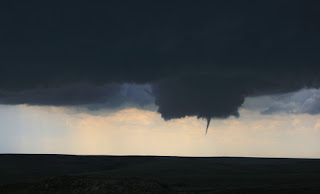 Below :  Amazing Structure as Tornado Lifts after touching down NW of Canadian 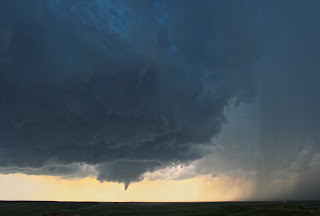 The Wall Cloud then occluded and the Storm started to move South East a bit so we re-positioned a few miles back towards Canadian with the Storm morphing between Classic and HP Stages.

Below : Panorama of the Storm as it was sat on the Outflow Boundary

With the Supercells firmly stuck on the Outflow Boundary we moved again further to the South East to be around 1 mile north of Canadian, we watched as an area of RFD Flung wrapped a rain band out towards our south and then east of us before finally completely wrapping it back to the west, rotation was really cranking up now and another what appeared larger tornado was imminant. At this point I moved us another mile south to be sat on the Canadian River Bridge about 1/4 mile North of Town, as we pulled up to stop a large cone tornado dropped about 1 mile to our West.

Below : Radar Grabs from Baron and GRLevel3 showing our location at the time of the Tornado. 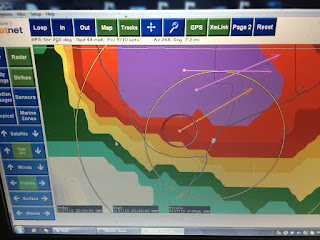 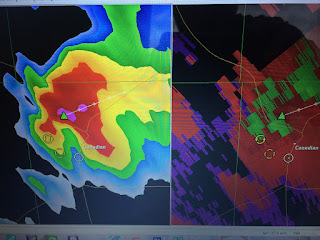 Our position could not have been better and there was no need to move as the stationery tornado grew larger and had now been on the ground for a full 10 Minutes growing from a Cone to a Stovepipe and now nearly wedge status. 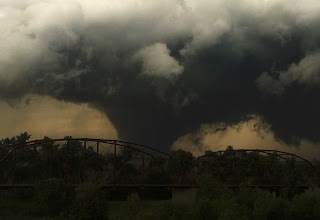 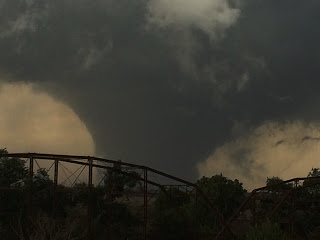 At the time of the above pictures unfortunately the Tornado was impacting a gas drilling rig injuring 3 workers with impaled injuries although not life threatening thankfully. Once the Tornado started to rope out we repositioned once again just south of Town and continued to watch numerous wall clouds and funnel clouds dance around. This Supercell was not done yet and although further storms were coming up from the Amarillo area we still had a good hour of time before these storms would crash into ours and possibly spell the end of the chase, was there one more surprise and hopefully at 6pm CDT So we could nail a birthday tornado for Arron. 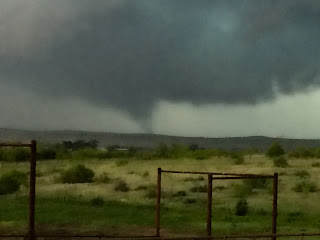 And after that happened all the storms congealed and went outflow dominant, but what a day this was. We headed back to Amarillo and The Big Texan Steakhouse for celebratory steaks and talked with other chasers about one of the best days of the 2015 Season........So Far!

SPC Reports For This Day Below