After the gruelling 12 hour drive up from Dallas the day before we awoke in our favourite Pre-Tornado Town of Limon for the days risk. The SPC had a 5% Tornado Risk in NE Colorado for storms moving north and north west along a stationery boundary that had moisture being pumped into the eastern side of it from low level south easterly winds. The big question was could 50f dewpoints make it up here in time which would be plenty for amazing Colorado. My target for today was a triangle of Fort Morgan to Sterling to Burlington and early storms along the front range suckered us in whilst the boundary was cooking near and south west of Burlington. This looked like a carbon copy of June 5th last year but with not so striking moisture available. The first storm we intercepted near Fort Morgan moving north straight away aquired a Tornado Warning and we went very close to have a look, this storm was massively outflow dominant when we allowed it to follow us eastbound along I76. But inflow started to crank up sporadically and enough to form a small inflow notch and our first Tornado of the 2016 season near Fort Morgan, This small EF0 Hoisted farm equipment across the road and span in a field next to us with a small silver coloured cone above it, it never fully condensed but was strong enough to strip trees of leaves whilst on the ground for a few minutes. 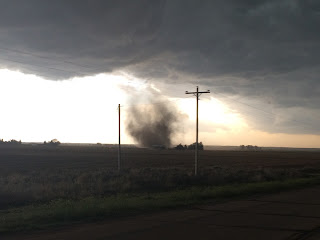 It was now that we made the decision to leave these storms as they were increasingly cold and wet looking and blasted east towards Yuma and Wray on exactly the same road as the 5th June last year, surely lightning could not strike twice ??

About 10 miles west of Wray near the town of Eckley a pair of Supercells were moving north and the top one that looked awful on radar started to spin right in front of us, as we were west of it a slender white cone started to drop, it really was an amazing sight from such a poor looking storm. This Tornado was on the ground for a few minutes. 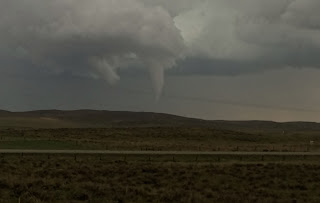 After this we crept east to watch the next much bigger and better looking Supercell approach the town of Wray. Stopping just west of town we watch amazing rotation drop Tornado number 3 a brief dust whirl with a cone above and then proceeded to the junction of Highway 385 in the centre of Wray in the hook of the storm with insane rotation above our heads on both sides of the road another bigger Tornado was imminant surely.

We went about 2 miles north on the 385 and pulled over to stop as a white funnel above our heads starting to touch down literally in front of us, the structure at this point was amazing. 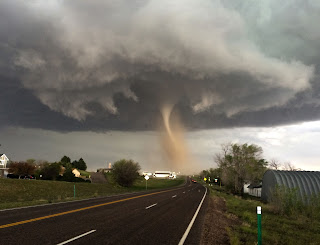 Above : Tornado number 4 touches down just North of Wray (Colorado)

At this point we knew this was going to be one of those picturesque Colorado Tornadoes and could have driven right upto this thing as you can see above there were not a lot of vehicles on the road at this time but I chose to hang back and get the full beauty of the whole structure and Tornado in the next shot taken by Mr Vicary on a much better camera than mine. 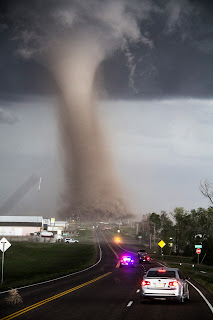 Above : Fully condensed Cone Tornado and by now all manner of Emergency Vehicles speeding up the road.

After this was on the ground for about 20 minutes the road north was closed off and it was chase over so we headed to Colby (Kansas) for the night. An amazing Colorado chase and an amazing Day 1 of the trip.

The Wray Colorado Tornado was rated EF2 And damaged a few businesses and houses with a few minor injuries.
Posted by Paul at Sunday, May 15, 2016