Sunday was shaping up to be the bigger day of the 3 day risk and we awoke in Colby (Kansas) to a broad Moderate Risk area and 10% hatched risk for Tornadoes from Kansas down to Southern Oklahoma. A surface low with attendant southwards dryline would be the focus of storm initiation today. We went to Greensburg for Lunch and dropped a little south of there to the Oklahoma Panhandle to a developing storm near Woodward. The Surface low was in NE New Mexico and would transition east north eastwards to be in South West Kansas by 00z. Everything was pointing to an east norteastward moving cyclic supercell, but in reality what happened was very different to what we were expecting with storms continually splitting and low level shear never being good enough all day, at one point near Alva our Supercell did rotate like crazy but just could not get the job done due to low level winds being very weak. There were a couple of brief Tornadoes in NW Kansas ironically near Colby and a rain wrapped 2 minute Tornado near Duncan in Southern Oklahoma but other than that it was a very underwhelming day given the parameters on show, just goes to show Mother Nature was in charge once again today. 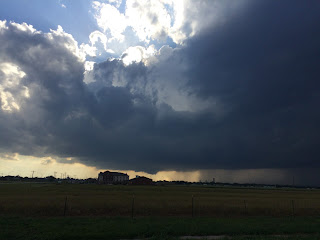 Above : Supercell near Alva starting to tighten up.

We cut the chase off north of Enid when things started to wind down but did have a nice show of Mammatus as the storms moved away South Eastwards. 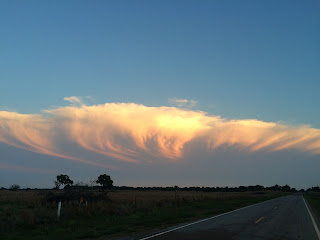