Started the day with high hopes in the Texas Panhandle and with a 5% Tornado risk we didnt have to go far and headed to Shamrock for lunch. An LP Supercell fired between Shamrock and Childress and we were in a perfect position to watch this from initiation. After staying east of it for an hour it was clear there were capping concerns early on and I was torn between a westward moving outflow boundary near Woodward and another Outflow Boundary near Childress. I chose the Childress option due to numerous storms heading up from the Lubbock area. In hindsight I should have stuck to my gut as a storm did go up near Fort Supply and interacted with the OFB Late on. But we stuck with our storms which were appalling for most of the day and when we finally put 20 miles between us late on to get some LP Structure and lightning it went on and hit the OFB near Childress and became stationery and started dropping large tornadoes. But of course sometimes things happen which go against you and this was one of those frustrating chase days, lots of flooding rains the preceding days had caused numerous road closures and our road to the night-time wedge was closed meaning a 45 mile detour which we simply could not make.

A very Frustrating chase day in the end when we could have just driven west to an almost stationery Wedge Tornado near Turkey. 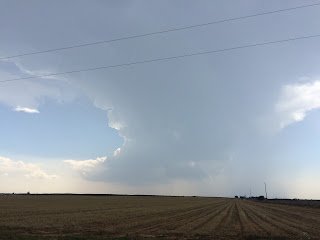 Above : LP Supercell SW of Shamrock in its mature stage.
Posted by Paul at Sunday, June 05, 2016