Started the day in Amarillo and headed north towards Liberal and then on towards Garden City (KS)
Storms were starting to fire but were really struggling against a pretty strong cap. Around 6pm and when storms were near Leoti they suddenly exploded into life when they interacted with a NW-SE Orientated Boundary moving down from Goodland. Lightning really picked up and our now Supercell split with the right split heading off North East and the left split heading straight North and trying to latch onto the boundary. If it could then we could be in for a quick turn to tornadogenesis. Our storm then became stationery and it was then I knew it was only a matter of time as it had latched the boundary and sure enough 10 miles north of Leoti a clear slot became apparant and our now amazingly structured classic Supercell put down a slender cone Tornado just west of Highway 25.

Below : Tornado 10 miles north of Leoti near Highway 25 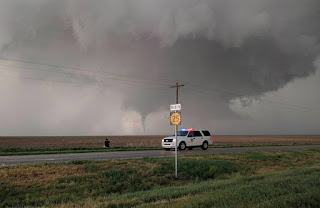 We ventured into the hook but by now the storm was becoming HP in nature so once again went 5 miles south towards Leoti where the structure was incredible. We watched as the storm fizzled away into the dusk sky watching anvil lightning and admiring the stunning Mammatus under the anvil to our south starting to get lit up by the setting sun.

Below : Mammatus to our South 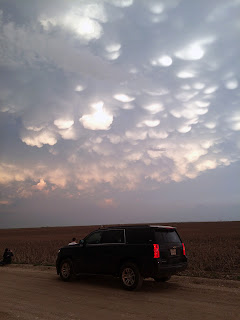 Not a bad start to a 7 day outbreak of severe storms for the Central and Southern Plains and another big day to come tomorrow with an Enhanced Risk in the Texas Panhandle.
Posted by Paul at Thursday, June 02, 2016