Started today in Garden City with a general chase target of the Texas Panhandle from Spearman in the North to Childress and Lubbock in the South. The Models today had the dryline firing on the Texas and New Mexico Stateline but in reality they were dreadful once again with the main show being the storms that initiated on a thermal gradient over to the east of the Caprock between Pampa and Childress. After getting some lunch in Dumas we watched a dryline storm near Dalhart really struggle with moisture issues while all the time the storms to our east were looking very impressive as they headed northbound. After it became apparant the storms to the east were the main show of the day we set off eastbound and punched through some hail near Perryton to sit east of the line. The storms were pretty awful looking HP Supercells with tonnes of lightning and not much visibility. About this time both storms which were south of Interstate 40 started to drop Tornadoes and this was in response to the LLJ Cranking up and hitting those storms first as it impacted the Caprock. So we stuck with our storm as one last cell merger occured around 615pm. Suddenly with a clear base visible and an amazing looking bowl shaped wall cloud appearing and winds going insane with 35mph sustained inflow things were looking up. We headed west towards Perryton and drove under the wall cloud and suddenly came upon an amazing white cone tornado which popped out of the rain. We continued west as this tornado lifted only for another tornado from a seperate mesocyclone touched down a few hundred yards to our north west. The RFD was insane around this tornado as it roped out in front of us.

Below : Tornado Number 2 as an Elephant Trunk and Rope out stage in front of a Nodding Donkey 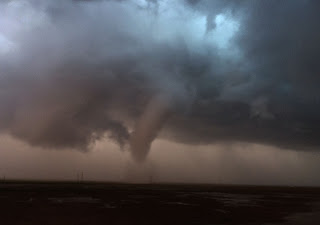 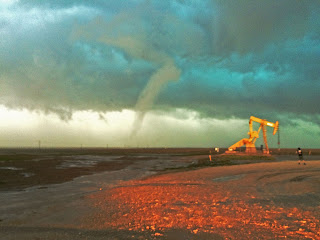 The bigger bowl shaped lowering was now about 5 miles to our east and on GRLevel3 was showing insane rotation so we headed back east and literally only got 3 miles east when a stout cone Tornado dropped just North of our road, this was literally across a field from us and it didnt take long for this to turn into a wedge with 73/68 spreads after all the earlier rain LCL's were on the floor. Tornado number 3 was in the bag and also a satelite tornado appeared at the same time making it number 4 for the day!

Below - Wedge Tornado south of Perryton and Wedge Selfie 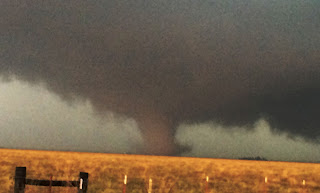 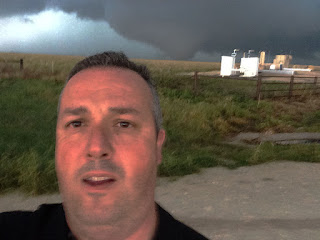 Ended the day in Amarillo and celebrated an amazing day of Tornadoes in the Texas Panhandle and went on to 5 for Tour 2 with the biggest days still to come.
Posted by Paul at Sunday, June 05, 2016