Today's risk would take us back east to North Dakota. A slight Risk of Supercells with a small risk of a Tornado but only if the cap could once again break. My target was Bismarck which was on the triple point and we went there for an early lunch and watched the boundary bubbling away. 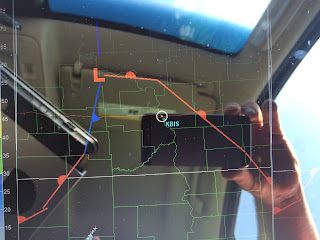 At about 730pm finally the cap broke but it was slow going and the cap beat down the first couple of storms but the storm below would go on to become 1 of a pair of Supercells that would sit stationery South West of Bismarck for most of the evening. We stayed east of the Missouri River thinking they would move North East but had to watch from the other side for the rest of the evening.

Below : Start of the LP Supercell South West of Bismarck 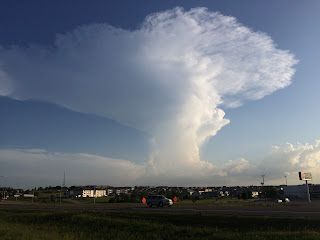 We did find an amazing viewpoint South East of Bismarck and watched for a few hours lightning dancing over the Missouri which in itself was amazing, Tim Marshall and the TWIRL crew also joined us in this tranquil setting.

Below : Dying Supercells at Dusk in North Dakota 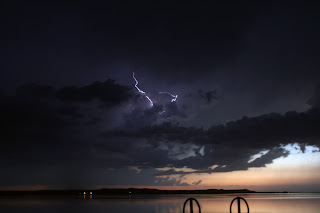 After that we went back to the Hotel and were awoken at 430am to an intense Bow Echo rattling across North Dakota which brought 70mph winds and Golfball sized hail. A very early wake up call!
Posted by Paul at Thursday, June 23, 2016