Awoke on this day in Childress and SPC went with an Enhanced Risk of Storms with a 10% Tornado Risk centred around the Woodward area with a broad 5% around that stretching up into Kansas and down to the bottom of the Texas Panhandle. An Outflow Boundary would be the major player today and with Mid 60's Dewpoints today looked very good with Strong Instability and 45kts of Flow promoting intense Supercells. After heading north we grabbed lunch in Shattuck and noted the boundary moving back to the north so on we pushed into Kansas. We went further north to sit about 10 miles south of Minneola and watched Towering Cumulus explode before us, this would go on to become the amazing Dodge City Cyclic Supercell. We soon passed through Minneloa with Tornado Sirens blaring and stopped about 3 miles north of town to watch a rapidly rotating wall cloud to our west. From the look of the wall cloud it was only a matter of time before we had a tornado and sure enough the first touchdown occured at 1659pm about 4 miles North West of Minneola. 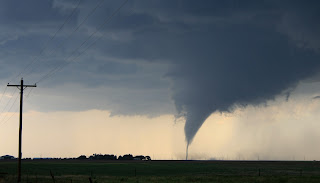 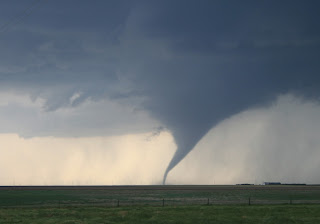 Below : Selfie holding the now large Stovepipe Tornado at 1708pm 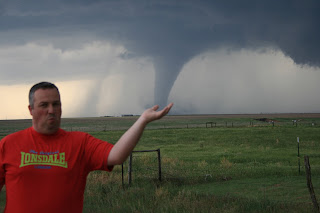 The tornado was now starting to head to the north quite quickly so I repositioned us further north and then west down dirt roads. This was the most exciting part of the chase because we soon came across rain soaked tracks which put the cars and the drivers through their paces. Our first Tornado was now roping out to our North West and a stunning occlusion hand off to the North East was going on. The Supercell was now taking on an ominous look with 2 Mesocyclones and it looked odds on that we would be getting twin tornadoes as we approached from the south just a few miles away from the churning mesocyclones in front of us.

Below : 2 Tornadoes touch down from two seperate Mesocyclones 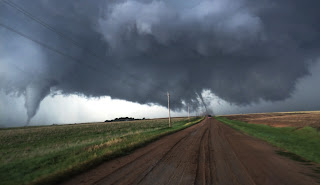 Just after the above photo was taken we actually had 3 Tornadoes on the ground at the same time, this was turning into a fantasy chase. The bigger tornado to the left was almost stationery at this point and we finally got back to tarmac and watch a huge Barrel Tornado turn into a tall Stovepipe with a wheat field in front of us just 5 miles South West of Dodge City. 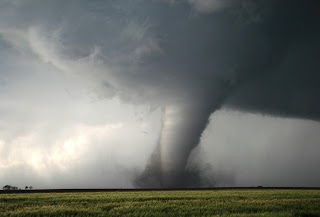 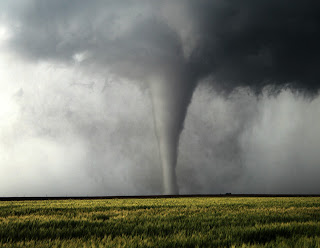 This Tornado started to rope out after about 15 minutes on the ground but off to our North was a huge Wall Cloud hanging just to the west of Dodge City, another Occlusion was about to happen and this time swirling multi vortexes were only going to turn into 1 thing a large wedge Tornado! 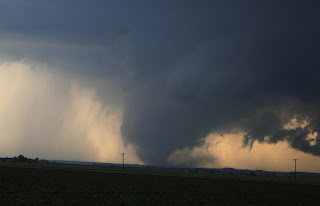 About this time traffic problems to the south of Dodge City made it hard to keep up with the storm for about 15 minutes but we went around the ring road and heading north towards Jetmore where we saw another 2 Tornadoes North of the Town. 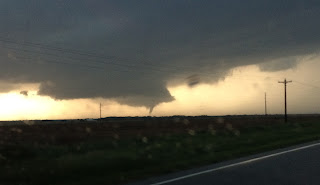 The last Tornado we intercepted on this storm was the closest just south of Jetmore and this one caught me out a bit as it was on the top end of the storm and crossed the road moving East South East right across the road in front of us slamming the car with wet RFD. After this we headed back south to Dodge City as the Storm had finally crossed the boundary and started to fall apart. We stopped at a garage and took pictures of the incredible Mammatus display going on above our heads at the end of an incredible chase day that gave us the most cyclic Supercell I had ever seen.

Below : Mammatus to end an Incredible Day in Dodge City (Kansas)