Started today in Pratt (Kansas) and early thoughts were this was going to be a down day due to the SPC Downgrading the Kansas risk to Marginal with a 2% Risk for Tornadoes. We drove North to Great Bend for Lunch and awaited more model updates, it certainly felt like a decent chase day with temps in the 80s and Dewpoints in the High 60's. It just had that feel to it and after driving east to Mcpherson the atmosphere felt like a bomb was going to go off. Once again Outflow Boundaries would be the driver today and there were 2 left over from the previous days storms. One near Wichita and the other just north of I70 near Salina and we were positioned between the two boundaries. A new SPC update came through about this time and the upgrade of a 5% Tornado risk was now put on the SPC Page with it running from Wichita down to Oklahoma City, the Salina risk was in the 2% Marginal Zone. At about 430pm convection was really starting to fire off in both OFB areas, the first near Ellsworth and the second between Wichita and Emporia, both looked decent although i noticed the southern area was fighting quite a strong cap with Pileous showing on a few occasions. I made a decision to head north towards Salina but must admit looked over my right shoulder at least 5 times umming and aarging!! As we got to within 15 miles of the Salina storm the updraught started to explode so the chase was on. We came off I-135 near Minneapolis and watched the storm become stationery, it had hit the Outflow boundary already and was immediately Tornado warned. Our problem at this stage was we had been caught out by the storms stalling and had now been put into the hail core with golfballs falling around us and we even missed the first Tornado SW Of Minneapolis. We then went back south to near Bennington and observed a few shear funnels but the base was still very high. We continued to follow the storm and when it was near Solomon it really got its act together and at 605pm the rotation cranked up and the first large Tornado dropped in front of us.

Below : Tornado Touched down at 605pm CDT 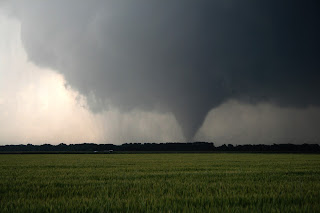 We watched this transition quickly from a cone tornado into a 3/4 mile wide Wedge almost looking exactly like Bennington from 2013! Was this redemption ? I think so and it was now to put that 3 year pain behind me finally.

Below : Tornado turning into a Violent EF4 Wedge Tornado East of Solomon (Ks) 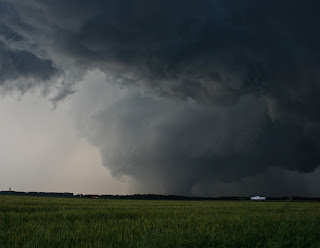 Now it was time to keep up with the east south eastwards moving Tornado which was crawling along the boundary at 15mph. The only road available without coming across the damage path was Interstate 70 eastbound. I am not a fan of chasing along these types of roads but we never once came across any problems with the road being shut by the Kansas Highway Patrol. We next intercepted the Violent wedge just north of Abilene and it had now been on the ground for about 45 minutes.

Below : Wedge Tornado approaching from the North near Abilene 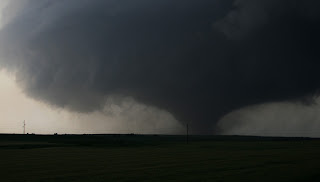 The storms motion was jogging along just to the south of east always staying about 1 mile north of the Interstate but it would cross soon just east of Abilene so we went back eastbound to get a mile or so in front of it and stopped on a hill on the hard shoulder of Interstate 70 to watch it cross the road, the roar was deafening at this point as we let it get to within a 1/4 mile of us.

Below : EF4 Wedge Tornado about to cross the road behind us. 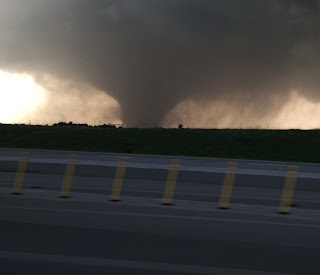 Below : Tornado cross the road having been on the ground for 1 hour now. 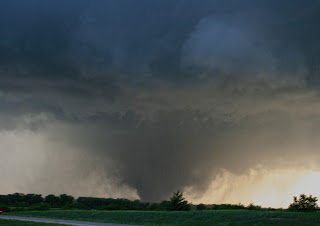 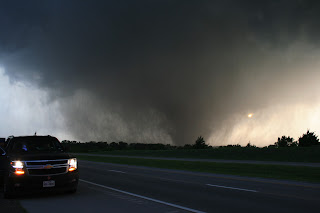 After this we watched the tornado cross the road and went south through the town of Chapman where a Tornado Emergency was screaming out over the radio. We drove about 1 mile south of town and onto a Hill and wached in horror as the town disappeared with the now rain wrapped wedge tornado roaring into town. We all took a group decision to go back north once the tornado had passed and lend some help or first aid and it was effectively chase over after this point with the tornado still on the ground roaring off to the east having been on the ground for 92 minutes solid. After driving back through the town is dawned on us just how lucky the town was with the damage path just missing the town by about 400 yards and ripping up trees and power lines instead. This unlike Dodge City day was a sobering one for us at the time as we did not know just how many towns had been hit or levelled until later on and only then did we find out just how lucky people were with the Tornado managing to miss and sideswipe about 6 towns in the path and not hitting one of them. 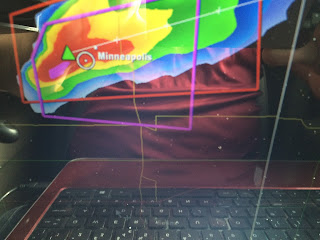 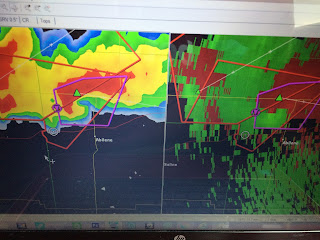 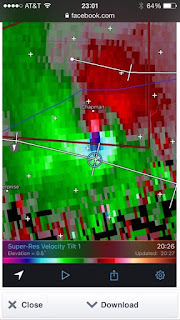 Above : Some Radar Grabs showing our Position relative to the storms cycles.
Posted by Paul at Thursday, June 09, 2016