Well its that time of year again when the Blog should become a little more active, with a little over 5 weeks until we depart (6th May) it's now we start to look and see wether any patterns are emerging and how the overall pattern has been behaving the last couple of weeks.

The last 2-3 months have been very different to what we have seen in the last few years with little activity across the Plains and only sporadic action in Dixie Alley. This looks like staying the same for a few more weeks yet, with Northern Blocking affecting not only Europe but also North America as well, very cold air is entrenched across most of the Northern Hemisphere.

Nearly 50% of the States still have snowcover and with a de-amplyfying system coming in for easter weekend expect only minimal risk days with NW Flow and a surging Cold Front to wipe out the moisture well into the Gulf Of Mexico over the next 8 days or so.

So how is April going to pan out, I think at this stage it will be a Month of 2 Halfs, the first half often cold with limited moisture but I am expecting a Pattern shift for the 2nd Half of April with more South Easterly winds from about the 17th onwards, the Gulf Of Mexico SST's are still just above normal in temperature so the transport of moisture should not be a problem once a strong LLJ Sets in with response to a Strong Upper Trough. And once a system crosses the Rockies with all that Cold Air aloft I would expect quite a decent chance of Severe weather once that happens.

So sticking my head on the line, I am going to go with the first real severe weather action from around the 19th-23rd April in the Southern Plains, lets see how that plays out over the next few weeks.

Also the last few days have been playing around with Stacking Software and seeing how easy it is to layer in 5 or 6 images of Lightning and see how it works out, some decent results, but only when the focal viewpoint is exactly the same  with absolutely zero movement of your target. 2 Storms in the last few years have allowed me to have a play with this software and the results are below.

The first is from the Plainview (Texas Panhandle) Supercell from the 01st June 2012, it is made up of 6 images shooting towards the NW at the Storm which was moving SE (Towards us) at 5mph

The 2nd Image is from a Severe Storm which formed along an outflow boundary near Tucson so shooting from an elevated position at 7,000ft asl at Windy Point on Mount Lemmon we afforded a great view as the Storm rolled into the Eastern part of Tucson. 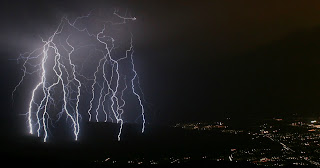