Models today showed the moisture on a traditional Monsoon Flow (Eg SE-NW Flow) which we have not seen yet this trip. In these Set-Ups the area in the SE Of the State is always favoured so today we had a different area to chase which was good as we had different scenery to show the guys. We headed east from our base and had lunch in Globe, a nice Storm went up just south of the town and started throwing out some very nice Cg's, the gutting part of this was finding an amazing vantage point 8 miles South of Globe on Highway 77 just as the storm was dying off. We then headed South towards Tucson and took an amazing road that literally turned into a sandy dry river bed for about 40 miles just north of Benson, unnerving signs of "DO NOT ENTER IN FLASH FLOODING" started to appear quite regulary and with 2 developing Monsoon storms on the road in front of us moving at us the next hour was going to get entertaining. The car handled the roads/rivers quite well and we made it to Benson in the end, with 1 hour to Sunset and with a large Storm that was going to sustain until after dark to our East near Willcox we headed that way and found a nice vantage point to the lee of the mountains, everyone then shot some nice Cg Lightning viewing from the West. We stopped at Tucson on the way back for a bite to eat and headed back to base for a 1am finish. 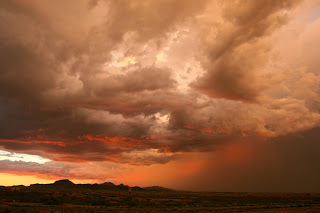 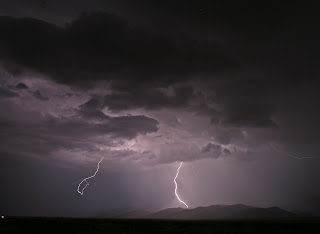