We awoke today after a very frustrating chase yesterday in Enid (N Central Oklahoma) and SPC had a large enhanced risk over SE Oklahoma and SW Arkansas which is not ideal chase country. Today would see a dryline out west with much better moisture east of I35 there was also an old outflow boundary around the Red River from yesterdays Supercells. I really thought the SPC Had the risk in the wrong area today and after running a few model runs we decided to head south after an early lunch in Perry. Along the way I somehow stumbled across a special bulletin from the SPC in which they had launched a special weather balloon and found that moisture was surging North-Westwards much faster than they anticipated and that a dryline bulge was racing across an area from Childress to Duncan. My mind was now made up that Pauls Valley was going to be my target. The location of the Oichita Mountains has always held me in good stead with set-ups like these and tend to steer tornadic supercells in certain ways. After refuelling the cars the first radar echoes appeared near Duncan and we headed to a location with a view to our south west to see a healthy storm building. 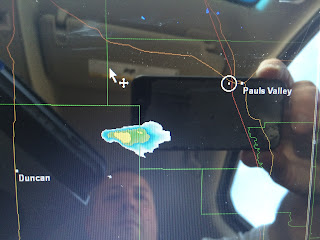 SPC Continued with their marginal risk and 2% Tornado risk over our area but by the looks of this storm I knew we were in business. It looked just like the Pilger violent EF4 from a few years back so knew straight away we were sticking with this storm. Other storms started to form around the Red River Valley which we could see to our south, the outflow boundary thing was nagging at me but on GRLevel3 the Outflow Boundary seemed to be heading North west into our storm, if our storm could get severe quick it might be able to ingest this OFB and then we will have a serious situation on our hands. We positioned ourselves another 5 miles south and the storm started to spit out some really dangerous lightning at this point and some small hail, the storm also looked like it had jogged to the east from its initial north east course. Once again I positioned us further South and then not long after a multi vortex tornado touched down. 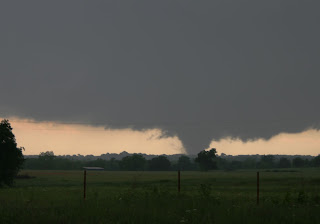 It was clear this tornado was becoming violent and quickly, once again I noted the tornado was not actually heading towards us but would slip by to our south so once again I repositioned us further south down I35 towards Wynnewood. Along the way our cars were suffering baseball sized hailstones hitting our cars and with a large cone tornado just a few miles to our west churning away heading towards us it was quite an eerie sight. 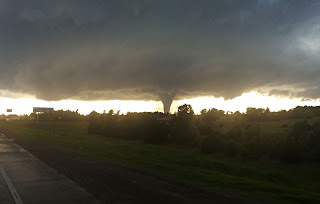 I plotted a course to Ruppe Road which would take us right next to where the Tornado would be so knew it would be crucial to get to our viewing spot before the tornado to see if we could get a safe location, as it turned out when we got there the Tornado was still about 1 mile to our west heading straight at us. We pulled our cars over and when we got out of the vehicles the roar of the tornado and the ground rumbling was like something I have never felt or heard before, we were literally a few hundred yards from a Violent EF4 Tornado. 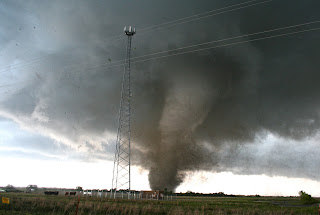 The videos we were now shooting were some of the best we have ever shot (Will link these at the bottom of this entry) The tornado was hitting houses, trees and barns at this point and was heading due east literally a few hundred yards to our north. The noise was deafening and we also started to get about 90mph RFD Hitting us as the tornado was to our ENE. Debris was raining down around us and items were getting flung across the field in front of us. As the tornado was about to cross I35 a few hundred yards behind us it roped out into a beautiful white rope and the mesocyclone occluded above our heads. 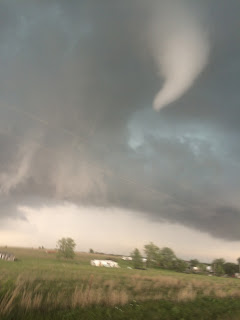 I probably dallied a bit too long at this point and should have been on my way further south and east as the Supercell was clearly not done yet with the 2nd occlusion looking ominously like it as about to put a strong wedge tornado down at any point and thankfully to the east of I35 and to the North of the town of Sulpher. We headed off again and took 35 south and then east towards Davis and Sulpher. We caught back up with the now classic textbook radar signature and could see the strong wedge tornado to our North. 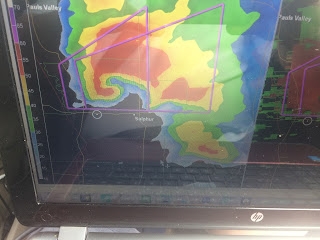 As much as we tried we could not get back in front of the storm so decided to head north when the storm dissappeared into the trees and hills of eastern Oklahoma, but as we were another bonus small cone tornado dropped out of the western side of another storm heading north east into our original storm (Tornado Number 3!!) After this things were becoming too dangerous and roads crappy so we cut the chase off and head to Mcalister for dinner and steaks. Later that evening we heard the awful news that 2 people had perished in our storm which as always takes the shine of a successful storm chase.

Links to the Videos Below :

https://www.netweather.tv/forum/topic/85558-chase-day-3-oklahoma-kansas-tornado-footage/
Posted by Paul at Friday, May 20, 2016