The last chase day of the 2013 Tornado Season for us and exactly 1 year to the day from that bad experience when leaving the Wyoming Barrel Tornado for Tornado warned cells in Colorado, what made today even more spooky was the setup was near identical as well, so the first thing was to make sure I learned from last year, pick a target and stick with it.

Started the day in Scottsbluff and went for an early lunch, as we were eating a Tornado Watch was issued for Central and Eastern Parts of Wyoming, this already at 11am MDT.

My target for today was Wheatland (Wyoming) as it looked like Storms would erupt over the top of the Rockies and move eastwards into much more favourable conditions for Tornadoes and Supercells over the flatter parts of the Laramie Divide and more importantly the tornado producing County of Goshen County. This area like Baca County in extreme SE Colorado seem to be able to do magical things with Supercells, so today we shall see.

As we went Through Torrington towards our starting position a huge tower went up in the distance, I remarked at the time this would be our tornado producer today and that was not a bad guess. We reached Interstate 25 in good time and arrived at one of my favourite stopping positions about 15 miles North of Wheatland, looking south west an incredible sight over the top of the Rockies, an already Classic Supercell getting ready to move east into the much moister air, temps and dewpoints at this point east of Wheatland and Chugwater were 76/57 and with the Elevation of 5,000ft this was ample to get storms spinning given the other parameters on offer. 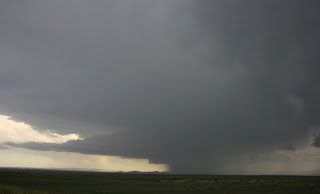 We blasted south to just south of Wheatland and watched as the Supercell approached, at this time we were 5 miles South west of Wheatland, the Storm really started to crank up at this point and the rotation about 1/2 mile in front of us above the road was going insane, you just knew we were minutes away from a Tornado at this point. It's not often you see such a classic mesocyclone spinning above your heads and certainly not within spitting distance of the Wyoming Rockies. 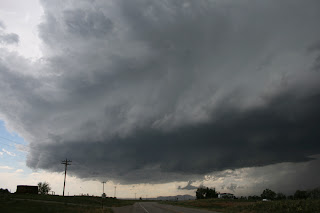 So could this be my first ever Wyoming Tornado about to happen and also if it did it would also be my Highest ever Tornado at around 5,400ft asl. Well the answer was yes!!
About 5 minutes after the above picture was taken a Tornado developed from a hidden Funnel cloud (Viewable from the West) which would have probably made it a Landspout Tornado, the condensation was clear to see spinning in the field about 1/4 mile down the road and just to our front left behind some water irrigation sprinklers. 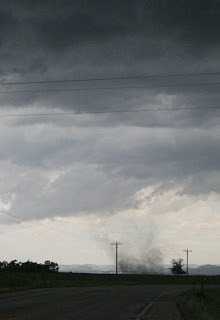 This Tornado was only brief lasting a few minutes, we then went back east and caught up with the rotation just to the SE Of Wheatland, sporadic Golfball hail also started to fall at our location, at this point we met up with Matt Phelps from ETT (Reed Timmers Tour Group) My attention was already being drawn to a new Storm about 20 miles further South near Chugwater, so much like a dryline day we abandoned our tornado producing storm and dropped down the line. Our new Supercell was really starting to look the part as it headed eastbound across Goshen County and onwards towards the Wyoming and Nebraska Border. 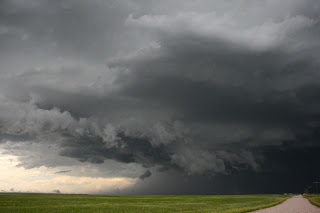 We continued to follow this Storm and witnessed another very brief Tornado (On Video Capture) near Veteran (Wy). The Storm was now fully HP And with other storm interactions ramping up it was going to be very hard to dodge the hail and the cores around these merging Supercells. As the continued Tornado warned storm approached Springer it had an amazing Barrell shaped Mesocyclone spinning at rapid speeds, how this never put down a Tornado we will never know but if it had it would have been a very large Wedge at this point. 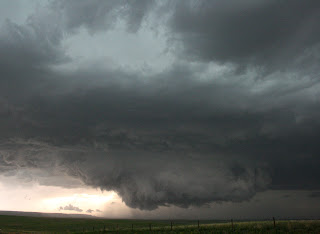 Things were now starting to get very messy, so I made the decision to abandon this storm and head south towards Pine Bluffs and the last storm in the line heading east from Cheyenne, when we got to near Pine Bluffs the strm looked very decent, we still had a few hours of light left in the day and there was no reason why this could not produce a late evening Tornado, our expectations were still very high. We even had our Tour 5 Picture taken in front of it she looked so good. 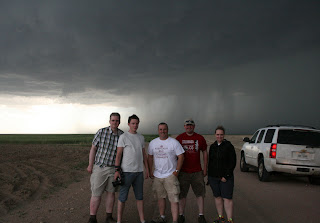 As we got to Kimball we took a South road (Yes That One Again!!) and then stopped about 5 miles in front of the Storm for some Lightning Pictures, the fading evening light was just about do-able at this point and the storm was pinging out a Cg every 5 seconds which made it pretty easy. The below shot is a 2 second exposure at F22 With an ISO Of 200. 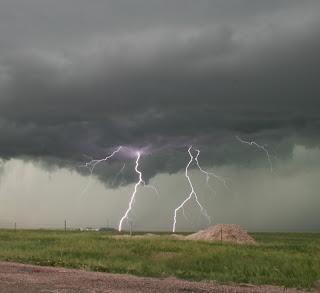 The storm was now moving more to the East South East so we re-positioned further east towards Sidney and then headed back north towards the Interstate, what happened next took us all by surprise, whilst we were setting up for more Lightning in the core to our North and watching the rotation also to our North, about 1 mile to our East an incredible Landspout Tornado quickly formed and churned away for about 5 minutes, the Funnel Cloud was clearly visible and as we were just to the West of this we had a perfect viewing position. 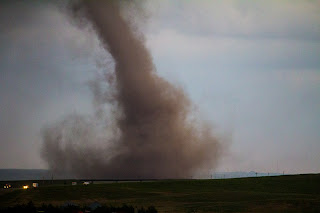 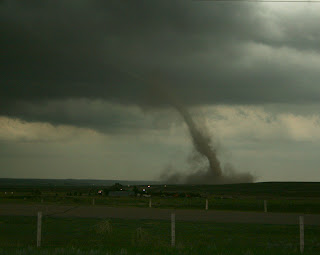 It really was an amazing end to an amazing Season and literally the last piece of chasing we had left in us before the trek back to Denver the next day. So not only did we score our first ever Wyoming Tornado today, we also got our highest and our first Nebraska Tornado for 5 years, you always knew Nebraska was going to have the last word for the 2013 Season and that State treated us very well.
Posted by Paul at Wednesday, July 03, 2013