Well it is that time of the year again, the time when us storm starved brits head over the pond and embark on Supercell and Tornado hunting.

This season has been one of the slowest starting I have ever followed and also quite incredible from just how long winter does not want to let go of it's grip, even today Snow in Kansas and wintry showers into Oklahoma from another crashing cold front last few days.

Most of the time and by the time we get to the states we are playing catch-up to our american based chaser friends but not this year, pretty much all of them are still awaiting their first photogenic tornado of 2013. April like March was a complete dud save for a few chase days in Dixie Alley. One thing that has been very good so far has been Storm Structure on Supercells that have formed on those rare chase days, this bodes well for the season ahead. Gulf moisture also has not had any struggles returning northwards for the last few favourable chase days.

So what beckons for our first tour which officially starts on Thursday 9th May, well it is currently not looking too bad at all, the is model agreement in the return of moisture for next week and an ejecting western US Trough, ECM Currently is quicker with the eastwards progress with an active day on Wednesday 8th May, GFS Is slower and favours the first real chase day as Thursday 9th May, obviously we would love the GFS To be correct at this stage as we would be hitting the ground running so to speak.

It currently looks like a dryline set-up from West Texas upto the Oklahoma Panhandle as things stand at the moment, but will firm up on this once we land on Monday and see if the models are still playing ball. Moisture will not be a problem, the only thing lacking at the moment is the upper flow (Or lack of it) from the Southern stream of the Jet. Will leave you with a few charts for now. 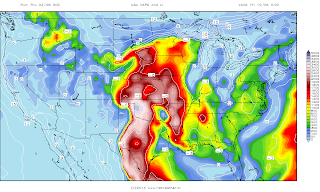 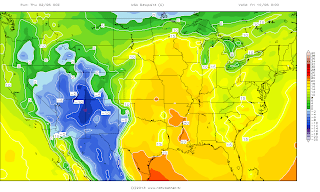