Started this day in Amarillo and the risk are had moved somewhat further south and east again, so it was back down the Highway to Heaven 287 back towards Vernon for lunch, Storms today would be initiating in temps of over 100f so there would not be much of a chance of Tornadoes..........Or so we thought! Local mesoscale influences throughout the day brought about a nice bonus chase day with 2 Tornadoes thrown in for good measure to surprise us as well.

We messed about with storms near Graham, Olney and Jacksboro for a few hours, these were mainly dumping small hail, but 1 of the storms started dumping baseballs in Graham and started to kill off the other smaller cells, as it done this it also lowered the temperature down to about 79f and with a 72f dewpoint things were starting to look quite interesting.

We went back west to the only cell left and punched through the core, only small hail was encountered, we took the south west road out of Graham and was greeted by a rapidly rotating wall cloud, it was not long before this put down a nice funnel cloud and boom fully conensed cone tornado right to the ground, this tornado was on the ground for a full 17 minutes, we had to keep moving every 20 minutes or so as the bears cage kept catching us up, but it was a real cool chase with the storms motion at 7mph. This Supercell was also riding some sort of boundary which extended north to south. 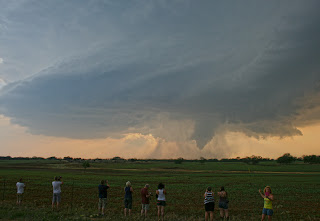 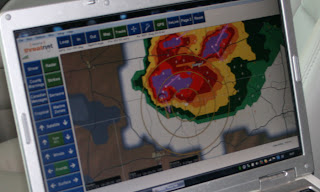 Our Position is shown above as the Tornado was just starting to do damge on this Classic Supercell
We then went further down the road after the Tornado had lifted and it was not long until the prettiest tornado of the day touched down a mile or so to our North, this was perfectly backlit by the setting sun, we watched and filmed this tornado for a while longer until the lightning got a little too close for comfort, after this we went further south but the storm took a huge eastwards jolt and left the boundary and over the next 20 minutes died a slow and painfull death in front of us. 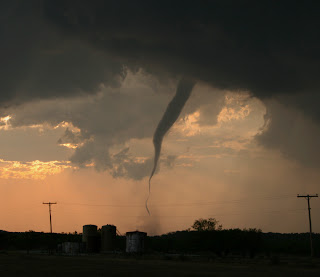