This would be the changeover day between tours 2 and 3 and getting away from DFW @ 12 noon was key to how this day played out. There would be 2 areas of interest today, the first an outflow boundary in Southern Kansas and the 2nd the Dryline in Central Oklahoma. As luck would have it things played into our hands quite nicely with the Outflow Boundary firing too early and out of our reach, as we approached Ardmore the first cell of the day along the dryline fired near El Reno and we caught up with this in the Oklahoma City metro. When we approached the city an ominous looking tornadic sky was all clear to see with areas of rotation just west of Edmond. We took an east option to I-35 and the Supercell really started to crank up at this point, heading east out of Edmond we witnessed our first tornado of the day a beautiful cone tornado heading straight for us. 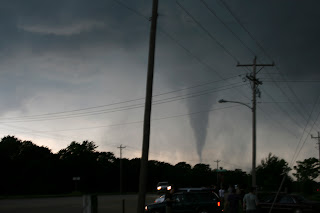 After escaping east from this tornado the same mesocyclone occluded and dropped our 2nd tornado at a range of a few hundred yards near Arcadia, we got blasted by RFD And made another hasty retreat east. We then took the interstate north east and then a good north option to catch up with the now EF4 Carney Wedge Tornado, which would be our 3rd of the day. 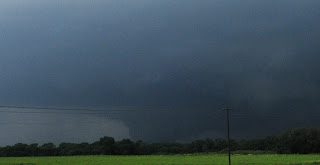 Our attention was then drawn to the tail end charlie which was already putting down tornadoes near Lake Thunderbird east of Norman, I plotted an intercept course near to Shawnee and headed south in good time, we then went just south of the Interstate and the tornado crossed just to our north by a few miles having deviated to the North at the last minute, this was also a Violent Wedge tornado that unfortunately killed people in a trailer home. 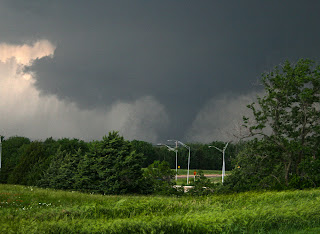 All in all a pretty sobering chase day given the amount of tragic deaths associated with these tornadoes, but it would be nothing in comparison to what would unfold on day 2 of this outbreak across much the same areas with the now infamous Moore EF5 of the 20th May to follow.
Posted by Paul at Wednesday, June 05, 2013