This day ended up giving me and the team our best ever LP Supercell structure with a simply stunning barbers pole supercell. My target area was around the Thedford area and it looked as though the cap was going to win out when we got to 730pm with towers collapsing every time they tried to organise. But finally 2 Storms broke through this strong cap and extreme instability blew up a storm that looked like somebody had dropped an atom bomb near Broken Bow. The 2nd storm fired literally just east of Thedford so we now had a choice, but my decision was made from just how extreme the updraught tower was exploding. Whilst approaching Broken Bow the Supercell was directly over the road i needed to get east to see the structure so we core punched through the northern part of the storm and took some decent sized tennis ball hail. When we got out of the core and looked back the structure was breath-taking with a stacked plates supercell in front of us. 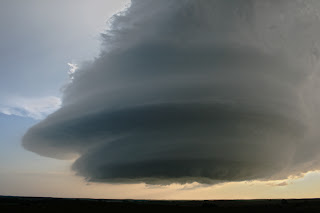 The other dangerous part of this storm was the incredible Cg barrage it was spitting out, one such bolt landed about 50ft away from us which had us scattering back to the cars. A little jaunt further to the east was called for just to keep ahead of the storm and get ready for the night-time lightning which would light this storm up.

Another drive further to the North East got us a perfect position just east of the storm to watch the insane Cg Lightning it was putting out, the barbers pole LP Supercell getting better by the minute still, this really was High Plains structure heaven and some of the best structure I have ever seen, and in Nebraska to boot. Amazing 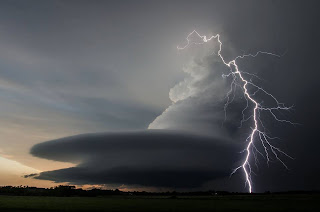 Picture Credit Above to Vanessa Neufeld
Posted by Paul at Friday, June 07, 2013