Last official chase day for tour 3 from what had been an action packed 10 days. Another Moderate Risk this time along the dryline which was situated in the Texas Panhandle. We started the day in Perry (Ok) and went west and intercepted a Tornado warned Supercell near Pampa (Tx) as we approached the storm it really tightened up and a spinning mesocyclone was about 1 mile to our west, a dancing funnel cloud nearly tried to produce a few times but it was clear this storm was losing its balance and inflow winds suddenly switched to outflow and the storm increased it's forward speed from 15mph to 49mph. 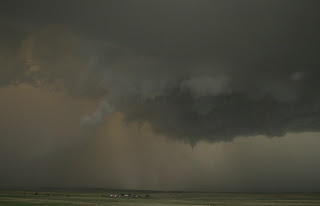 We were almost instantly blasted with near 100mph RFD Winds and had to make a hasty retreat to the east, the storms behind us had now started to take on the effect of a bow echo racing eastwards across north central oklahoma.

I then decided to blast through the line west of Elk City as 2 Supercells were near stationery down near to Childress, we got down there in good time and had the tail end charlie to ourselves, it was spinning like crazy but just could not get the job done, we punched back through the core to Clinton to gas up as we were really low and then followed this storm south and east to end the day in Wichita Falls in readiness for the changeover day at DFW.