Started the day in Amarillo with a chase target bounded by a circle from the Western Oklahoma Panhandle to Dodge City to Woodward. Got onto some storms that were weak initially and raining on each other for a few hours near Liberal, this would go on for a few hours before it became clear 2 storms would be gaining Supercellular Status and vied for the top dog billing. We followed the first storm from near Mead Southwards to the Oklahoma and Kansas Border area, it started to put on some great structure but all the time area of rain and storms were going up to it's south interfering with proceedings.

Daylight was fading and we chose to stick with this storm as it started to turn to the east, another Supercell had gone up further south of ours and it was clear even from our vantage point 15 miles to it's North East that this was a stunning classic supercell off to our South West. Should really have taken Highway 270 Westbound as we were on that intersection and intercept time would have been as little as 10 minutes but we carried on eastbound for the insane Cg Barrage our storm was putting out.

The Below image is a 4 second Image at F22 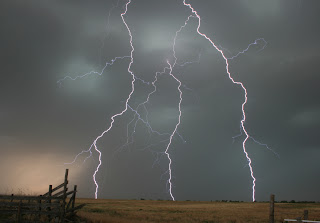 We finally got into Woodward at darkness and ordered some pizza and awaited the Storms out to our west to come over, little did we know that the following display would be perfect for our location, staying on the dry side just to the south of the training line of Storms. It really was like taking candy from a baby with nearly 100 shots at F8 ISO 100. 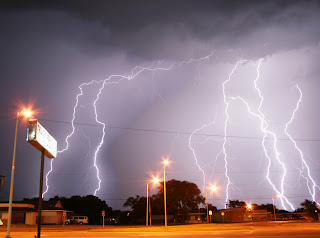