Started the day in Ardmore with a pretty good idea of where the Storms were going to fire today, the focal point was a real giveaway along and near a stationery triple point which was sitting just west of El Reno. Strong wording from the SPC Had me thinking this was a borderline High Risk day and we would need our wits about us today with the possibility of a Strong Tornado or two thrown into the mix. Little did I know that in just a few hours I would be facing the most challenging chase in my life ever and would be witnessing a record breaking EF5 Tornado with a 2.6 Mile Wide Circulation.

After getting to El Reno 3 Supercells fired just due west of there, the northern most was a little LP Supercell just West of Kingfisher and the other 2 were a pair of Classic Supercells, 1 west of Okarche and the other sitting stationery west of El Reno just tucked into that triple point, once again an Outflow Boundary stretched east from El Reno towards the Oklahoma City Metro area.

So today I would not be making the same mistake I made on the 20th May EF5 Tornado and would make a beeline for the Southern Most Supercell and get a good position on it from an early stage.

I took Highway 83 South out of El Reno to take our first decent look at the Supercell sitting about 10 miles to our west, temperature at our location were 84f with dewpoints approaching 77f (A  Scary Mix) and with a screaming sustained 30mph inflow wind from the South East you just knew something big and bad was about to happen, the structure at this point in proceedings was spectacular. 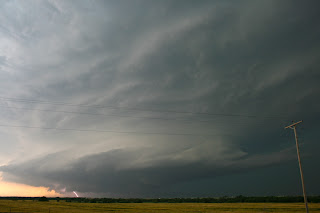 Our location at this point was about 2 miles South of El Reno looking straight west. I then re-positioned us a further 3 miles south to make sure we were keeping south east of the storm as it was moving south east towards us. It was about this time the first Tornado was touching down near Airport Road about 4 miles to our West North West, although we could not get pictures at this stage it was viewable to our eyes over a few hills. At this point I thought the storm was going very HP Supercell in nature and was busy snapping what I thought was precipitation curtains about 1 mile to our west but it turned out this was the whole tornadoes core, the giveaway was the violent motion of the rain curtains and the fact the mesocyclone just popped out of the rain and hail core. So another 1/2 mile re-position south was in order and we then stopped to look straight north. What we saw next was simply amazing, the whole Tornado had widened to about 1.5 Miles wide and was crossing the road from west to east just 1/4 of a mile to our North literally where we had been sitting just 90 seconds earlier. 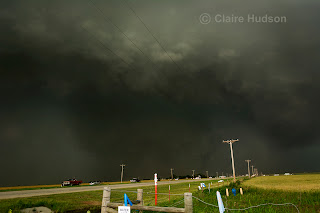 What happened next was totally unforeseen, the tornado just after it crossed the road did a 90 degree turn from heading east to straight north and the whole mesocyclone lowered onto the ground level from about 500ft above the surface, this made the Tornado grow from 1.5 miles wide to 2.6 miles wide within 45 seconds, the gate to gate shear in this tornado was clocked at a staggering 296mph and the RFD Path was now spreading out to nearly 5 miles in width. The next set of events makes the picture above even more heart wrenching, parked just North East of where this picture was taken were Team Twistex (Made up of Tim Samaras, His Son and Carl Young) and they must have thought they were in the safest place watching a South Eastward moving tornado moving away from them, I can only imagine that when the tornado turned they had about 1 minute to react and thinking the tornado was not as wide as 2.6 miles wide they tried to escape it to the east, unfortunately they could not outrun it and were all tragically killed when their car was thrown by the 300mph winds. Other chasers also had a close scrape with this Killer Tornado with their cars tossed into fields and other lesser known chasers were also killed in this event.

For us and the rest of the chasers the stress was just about to begin with a turn of events that could never have been seen starting to unfold. After the devastating EF5 Tornado just 11 days earlier people were running a little bit scared and what happened next needed to be seen to be believed, a radio station based in Oklahoma City urged all residents to get in their cars and flee south, this created carnage on the roads and the next several hours was almost hell on earth. There were only 2 river crossings south from Oklahoma City which were the Turnpike and Highway 83, all the other roads dead ended due to the proximity to the Canadian River and also the fact Moore was still a disaster zone to the east, whilst we were approaching Mustang all 4 direction were tail to tail cars and with embedded circulations and tornadoes approaching everyone was a sitting duck. 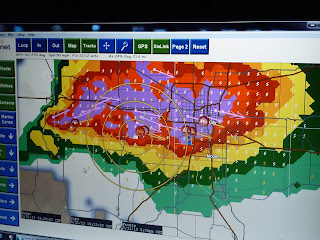 The radar grab above shows our location as the white brick, there were 3 confirmed tornadoes at this time, the one that dropped near Mustang is almost over our location, there is another near Union City to our west and the first original one nearing Moore. With the brilliant help of Tom navigating we somehow picked our way through circulation and rain wrapped circulations and tried to get ourselves out of the panic and carnage on the roads, we finally bit the bullet and blasted North through the bears cage and large hail/lightning and emerged on the Northern Side of the Supercell complex. 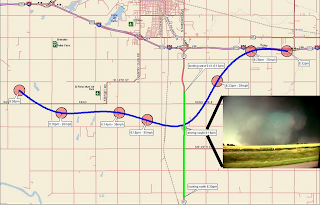 The map above from Scott Mcpartland gives a good idea of where the Tornado tracked and also where ours and their location was during this event.
Posted by Paul at Saturday, June 22, 2013