Started the day in Kearney with a Solid Moderate Risk with the Set-Up being a stationery boundary with ample moisture south of the front. Our Target area of Osborne (Kansas) was not too far off the mark and we were pretty much the first chasers on the first cells that went up near Smith Centre. It became apparant that the Supercell at the end of the line would become the dominant force and this storm started to move east. We got just south east of the storm and followed at close range into Smith Centre, just to the North East of Smith Centre it produced its first Tornado, a lovely cone that was visible for about a minute before it got wrapped in rain. 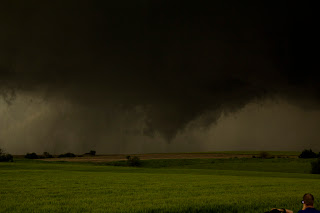 We followed this storm further to the east but unfortunately missed the big EF4 Wedge Tornado about 5 miles to our North as it was completely wrapped in rain. Storms then congealed into a mess of cells moving east so we followed them in towards Salina and called it a day.

A decent enough day but a Moderate Risk on Memorial Day Monday in Kansas is not nice with the amount of chasers on the road and on 1 storm. Storm Chaser convergence at it's worst today.