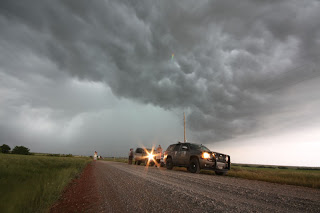 Started Wednesday May 12th in Enid (Ok) and knew it would be an area from N Central to Western Oklahoma that would be the third day in a row for a risk in the state. Our day started pretty badly with one of the guys needing treatment for a Recluse Spider bite, so it was off to the Clinic and Walgreens which took around 3 hours. We were then late on the show and after messing around with some linear storms along the Cold Front near Woodward our attention went South and East towards Elk City for a much bigger Supercell. We went South from Elk and to our west was a massive HP Storm with Bottle Green sky filled with large hail and big Cg's. Got pushed east and then went south down some dirt roads, unfortunately as the cell was about to drop the Clinton Tornado my back left tyre blew completely down to the metal rim which cost us valuable time. We missed the Tornado by literally 5 miles, some very nice hearted Oklahomans helped up change the tyre and we still had time to intercept another few Supercells North of Elk City as darkness came. All in all a busted day for Tornadoes but better to get the bad luck out of the way all in 1 go!