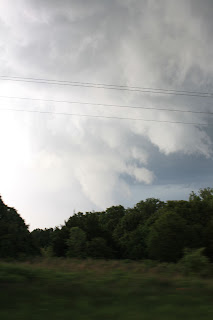 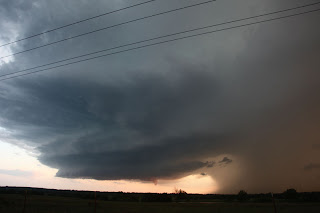 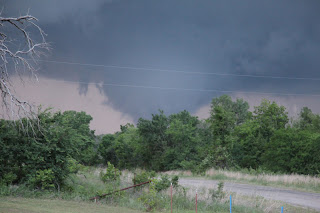 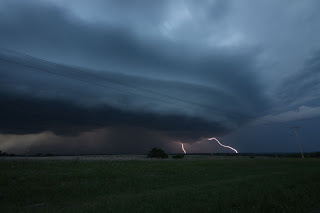 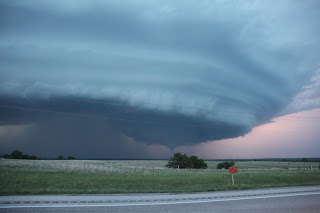 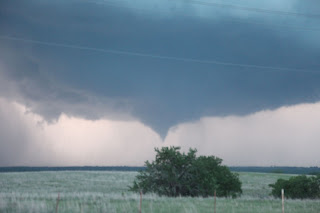 Ok so why are Changeover Days always High Risk! This day turned out to be the best of the year for me anyway so it mattered very little in the end thanks to a text book Tail End Charlie Dryline Supercell that dropped 3 Tornadoes, and after seeing one earlier just SW Of Oklahoma City it made it 4 for the day and 7 in 2 days Chasing. After bidding farewell to the Tour 2 Guests the lucky early arrivals got an extra Chase Day into the bargain. SPC Had a very narrow High Risk mainly to the NW of Oklahoma City, this was for an obvious Outflow Boundary that had the kind of Chaser Circus never seen before. The Supercell for this High Risk duly erupted and dropped an amazing Set of Tornadoes near Hennessey (OK) At this time we were just leaving DFW Airport and had to hope that the Moderate Risk Box fired up for us and gave us something in consolation. So We drove to SW Of Oklahoma City and messed about with some Storms that were initially struggling, finally one Storm took hold and a Rotating Wall Cloud was observed, then the Funnel cloud was spotted to our West, the Storms core was still to our West and before I had time to manouvre the Supercell did a massive Hard Right turn and started to head due East, only option now was to head South and punch through the Hail Core to the Rain Free Base, took some Golfball Hail and then emerged with a massive White Funnel dangling just to my SW, Luckily I came to a N/W/E/S Junction and booked it east, the now funnel was to my North and was fully to the ground, with the Sun out behind us a brilliant White Cone Tornado was observed just West of Dibble (OK) Followed this Storm a little bit further but blew it off when it looked High Based and Outflow Dominant near the I-35 Junction, my attention was now drawn to a Single Supercell all alone on the Dryline just South of Paul's Valley. Sped off South for about 25 Miles through the Construction near Purcell and headed West to be greeted by an incredible LP Supercell. Got out for some Pictures and observed a nice Hail Roar above our heads. This thing was really tightening up and starting to Rotate and was now morphing into a the Classic Stage Supercell. I knew we had to head South and Fast as the Rotation was directly due South of us about to cross the farm track. Had about 5 miles to cover until the next East to West Road, along the way we got side swiped with lots of leaves and intermittent Wet RFD For a time, we crested the Hill to look back and could not believe we had literally just drove under a now Wedge Tornado which was hitting Power Lines giving off Power Flashes. A second Stovepipe Tornado followed the Wedge as the Wall Cloud Occluded. After videoing this event we went East a few Miles and observed another Tornado near Joy (OK) This had the picture perfect Mesocyclone Shot with Tornado that is much sought after. Ended this incredible day back at DFW To pick up the rest of the gang and to somehow try to show them the footage we had got earlier that day.
Pictures
1. Dibble White Cone Tornado
2. Classic Supercell
3. Wedge Tornado
4 & 5 Mesocyclone & Lightning
6. Joy Tornado
Posted by Paul at Friday, July 16, 2010