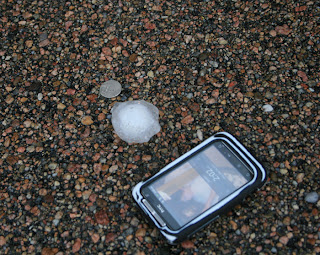 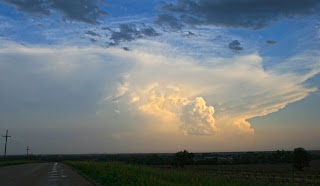 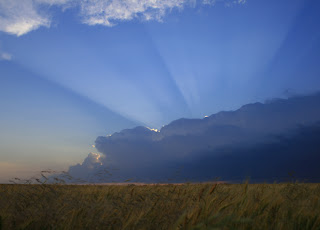 Started this day in Grand Island (Nebraska) after our Saturday bust in Nebraska, the risk area was quite broad with a 5% Tornado risk for Central and NE Nebraska and Northern Kansas. We headed south to Holdrege and an MD Was isuued for North Central Kansas. Storms were beginning to fire near Hays and rocketing North at about 50-60mph. So the trick today was sit just east of the Instability axis and watch them rocket past, after some early reports of Tornadoes in Nebraska (As per usual when we dont chase here) we watched a few HP Supercells fly past us, we let one Supercell core us and took 2" Hail just south of Gaylord (Kansas) Storms kept firing further south and an interesting LP Supercell took our eye just North of Hays. This would be the best structure we would see this day, we watched a few areas of rotation but once again the job just could not get done, we dropped further south to a right moving storm near I-70 And shot some Lightning before ending the day once again at Hays. A dissappointing day given the parameters but those storms were just too numerous once againa d HP in Nature did not help with getting around these Storms.
Posted by Paul at Tuesday, July 03, 2012