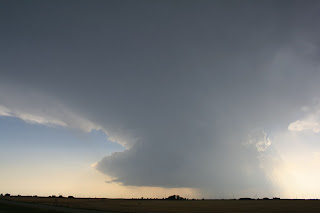 This is probably in my top 3 chases ever, the structure of this storm and our positioning around this tail end charlie Supercell was spot on from start to finish. We started the day in Wichita Falls (Texas) and I picked a chase target of Canton (N Oklahoma) We ate lunch in Weatherford at Braums and headed North, an MD was issued shortly afterwards and we watched growing cumulus become more agitated. The first cell of the day went up further North towards Enid but we stuck firm and watched a storm initiate over our heads near Canton. This cell struggled initially and took almost an hour before it became severe warned, we sat just east watching a nice little LP Supercell trying to get it's act together trundling east towards Hennessey at a snails pace. Just north of there we got some pictures.

The storms to the north started to congeal into a bit of a mess so we stuck with the Storm, after noting our storm starting to move South Easterly we went South towards Dover and got into a great position in a field and watching this Supercell transition from LP To Classic Supercell and start to spin in front of our eyes, this was probably one of the best times I have ever had in front of a Supercell just laying in a field of freshly cut corn watching funnels form and the Structure take on amazing shape. Cg's were starting to become very violent and one of these struck a tinder dry field just 200 yards in front of us starting a Grass Fire, we dialled 911 and within 3 minutes the Dover Fire Department were on the scene giving us the thumbs up as they shot past. 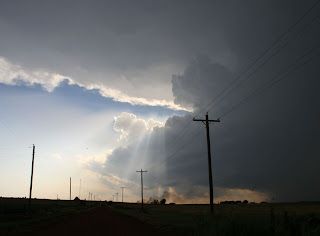 This Fire was started from a Cg Strike near a Farm just South of Dover (Oklahoma)
The Structure by now was starting to become amazing, we sat in a field watching this trundle towards us at 5-10mph, none of us said anything to each other sitting in awe just snapping away. 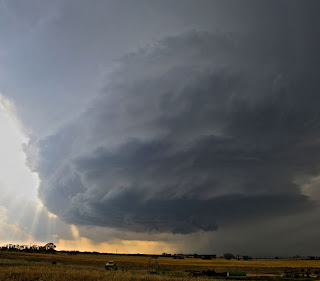 Classic Supercell Structure taking shape in front of us, the Supercell was now finally tornado warned and Sirens were blaring out from Dover.

After letting the Supercell's rotation and rain free base almost sit above us it was time to move South and East again, we drove through Kingfisher and took an east option, we then went South about 2 miles and the next views we got were even more stunning, Tornado sirens were once again blaring out at Kingfisher. 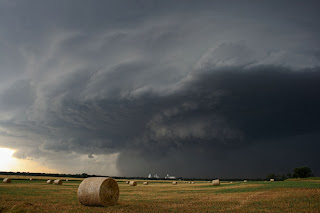 Stitch of the Supercell. 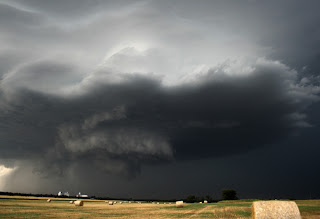 To our amazement still no Tornado touchdown was happening, surface winds from the south east were not that strong and maybe this was the last piece of the jigsaw that was missing, the LLJ Was expected to get stronger any time so maybe this was all that was needed, I was also watching radar closely as a huge HP Supercell that started near Lawton was moving NE At a rapid pace and was on a collision course with our SE Moving Supercell somewhere near Oklahoma City, so time was running out, we now started to take those amazing red dirt hard compacted gridded roads that had options every 1 mile, so off we went again, this part of the chase became the most amazing, almost like a scene out of Twister, we cris crossed roads with thw DOW's and the Rotate team and what seemed like every other chaser in the USA. Our next stopping point was just south of the Expressway SW Of Piedmont, again tornado sirens were screaming and we now had word on the radio that a tornado was on the ground somewhere to our north, along with 5-6" Hail. The storm was forming an amazing hook echo at this time and we now had large destructuve hail to our west, east and north, luckily the road went south so we could keep out of that quite easily.

Structured Pano just SW Of Piedmont. 6" Hail falling to our North West at this time. 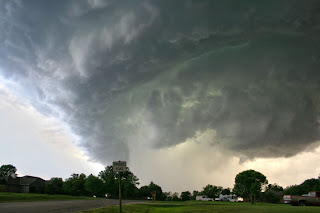 
As sporadic Golf ball sized hail started falling we moved another mile down the road and stopped again, this would be the stopping point that would allow the Tornado to be seen, a nice cone tornado with a pronounced clear slot that the tornado carved out of the RFD. 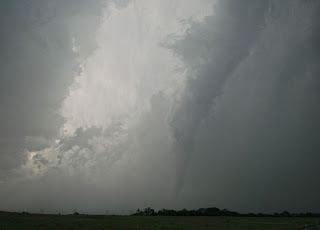 Piedmont Tornado to our North West. And Our position in the Hook area with large hail on all 3 sides of us. 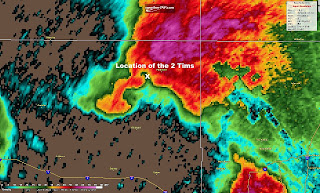 And still our day was not done, we were briefly thinking of riding out the hail but got word of others having their cars destroyed due to the hail coming in on a 60mph wind sideways so we had to keep pressing south, major problem now was the Supercell mentioned earlier had now merged with our Storm over Oklahoma City and created 1 big line, so why not go west, well another Supercell had formed near El Reno moving towards us, this had rapidly become tornado warned quickly, and we started to hear reports over the radio of a large cone tornado on the ground near Union City. Our problems were further compounded by my Baron weather radar losing all data due to storms in the Alabama area knocking out the radar coverage to us (This was comfirmed by 2 other chasers who also did not have data) So it was left to Arron and GRLevel3 to get us safely around the roads of Oklahoma City and he did a great job at this, finally we got to the Guest Inn at Norman at around 1am and looked back on an incredible day's chasing.