Started Monday 25th May in Garden City and SPC went Moderate with a 10% Hatched over Eastern Texas mainly for an expected Derechio. We chose to play the safer Supercell option in North Central Kansas along a stationery boundary. We headed up towards Salina and watched thing develop to our south over the Wichita area, a storm erupted to our west further North and we sat and watched a pretty little LP Supercell for about an hour but it was clear the dynamics just were not there today. The line to our south quickly caught up to our storm and it all became one big mess, with one eye on tomorrows already Enhanced risk over Texas, Oklahoma and Kansas we watched a bit of lightning and called it a day early and met up with Daril and Laura from the Farm for some dinner. An under acheieving day with just a few hail reports and further south in the 10% not 1 real picture of any tornadoes as it was one big mess of HP Modes. 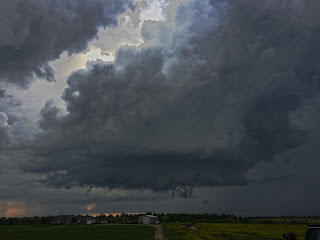