Started today in Sundance and in with a decent chance of my first Montana tornado. Decent moisture was in place with low 60's dewpoints and a stationery boundary and also upslope flow further west towards Billings we had 2 bites of the cherry. We headed west and then north to sit at Crow Agency and watched a very capped environment with mid 90f temperatures and little to no winds, something wasnt going as planned today. I always find easterly upslope flow in better in these set-ups than south easterly and once again this was playing out. The upslope storms to the west were still about 200 miles away and I took the decision to head back east towards Broadus and sit under the boundary just in case anything could fire. Once what little clouds there were burnt away to leave clear skies around 8pm I knew it was going to be a cap bust today. There could still be 1 saving grace though in the form of an Elevated MCS Which was now setting up about 250 miles to our North West which was heading in our general area. We got a hotel room booked at Spearfish and ate some dinner. I calculated the storms would roll through our area around 1-3am and everyone was up for a shot of that illusive Cg lightning near Devils Tower. Maybe today we can call a semi bust then because the storms arrived and we had great fun watching the tower light up and met up with the mental Olivier Steiger as well to watch the show.

Below : Cg Lightning and Shelf Cloud over The Devils Tower (Wyoming) 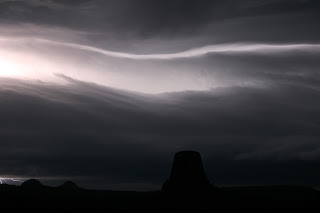