Started today in Scottsbluff and we awoke with 2 main risk areas, the first was a substantial risk in Northern Kansas and Southern Nebraska which was under an enhanced risk and all parameters were showing a substantial tornado event could occur if the cap could be overcome, but it was a substantial capping inversion, the 2nd risk would be the first of a 2 day Denver Cyclone event which seems to come along every year at the start of June or late May. The models were showing both risk areas and the HRRR was breaking out precip in both areas but more importantly EVERY Run showed a really nice Supercell just SW Of Limon whereas the Kansas risk was only showing spotty precip on every few runs. I chose to go to Ogallalla for an early lunch and then make a decision from there.

After a lovely Buffalo Burger in the Crystal Palace Restaurant (This place is always great btw) I went to the car and looked at some mesoscale data and with low to mid 60's dewpoints riding up and over the Palmer Divide with strong SE Winds down there and already 2 nice storms ongoing my decision was made and we set off back SW On I76 Down towards Sterling and then straight south from Brush. Along the way we could see cumulus towers in NW Kansas that were really struggling with the cap beating them down, The Northern of the 2 DVCZ Storms went tornado warned and we stopped for 5 minutes to take a look, the storm looks starved of moisture whereas the Limon/Simla Storm just had that tornadic look about it with a stunning bowl shaped lowering way off in the distance to the SW.

We left the northrn storm while it was still tornado warned and headed south on the 71 towards Limon, on route we saw the first of what would become a record breaking 8 Tornadoes in a day from this storm which had now also gone tornado warned, Sam got a picture of this tornado which we could all visually see and it was a really nice tall pencil cone tornado, After this dissipated a much bigger tornado touched down to the SW Of Limon near Matheson, We stopped and got pictures of this one which looked a lot like the La Crosse Tornado from a few years back.


Below : Tornado Number 2 viewed from about 5 miles North of Limon looking SW. 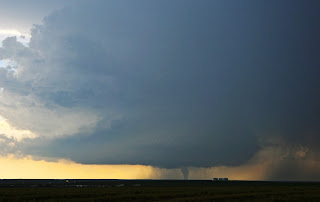 In the above picture you can see the western most exit on I70 At Limon with the Petrol Stations.

We then blasted through Limon and took Highway 24 down towards Matheson and Simla. By this time Tornado number 2 had lifted and we stopped just west of Matheson for some of this Supercells structure, having read about the DCVZ From a presentation a local Pueblo chaser did at Chasercon I knew this Storm was anchored and was not going to move anywhere for the next few hours and it was behaving in much the same way as the Calhan Supercell from a few years earlier. 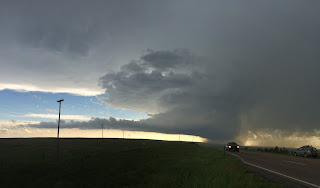 Just after the above picture was taken we headed further west and watched as Tornado Number 3 dropped, this was a big cone tornado which was just to the west of Simla, as the storm was moving SE The road would take us onto the north side of the storm and into the hail, our 3 South road options were all soft clay and mud so was a bit reluctant to take these as ordinarily we would get south east of the storm but as it happens the best structure on this was from the North or North East as you will see in the next few pictures.

Below : The structure now was amazing and this was rapidly turning into the Supercell of the Season 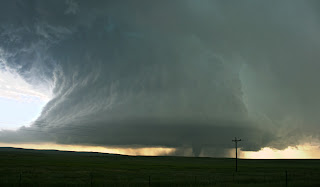 With Tornado number 3 on the ground just to our South we then watched it get even more ridiculous with another 3 Tornadoes dropping in the next 15 minutes all whilst the big cone in the picture above was ongoing, 2 of them were anticyclonic Landspout Tornadoes with tornado number 6 becoming a thin rope tornado from a seperate wall cloud. We parked next to a Colorado State Trooper who said he was happy for us to venture further west into Simla but interestingly turned everybody else around at this point.

Below: Cone Tornado on the right with Tornado number 5 (Landspout) to its SE. 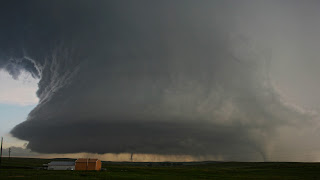 Golfball sized hail was making photography very hard at this point but we carried on snapping away before heading into even larger baseball hail near Simla and taking a Mud and Clay road south from there, the reason I took this road was because the bigger hail was not making the road saturated we had a better chance on making it to the SW and South side of the Supercell.

We took Highway 133 south out of Simla and went straight down the western side of the storm where we witnessed tornado number 7 whilst driving, this was a brief small cone tornado which was behind a rainbow, I have a few pictures of this whislt driving but they are pretty bad quality unfortunately and I was not about to get out with some of these hailstones smashing into the car. After finally getting out of the hail and heading back to a paved road Highway 94 we witnessed the final tornado of the day which happened after the storm had split and did not occur from the right split but the left split, this tornado was literally on the ground for about 1 minute.

We then stopped to take a few pictures of the structure and also chat about what we had just witnessed over the previous 3 hours, A Truly amazing day with the now LP Supercell shrivelling up before our eyes and seemingly putting a big white boot like cloud into Kansas.

Final pictures of some of the structure from the south and the chase vehicles in front of a sky full of Mammatus clouds. 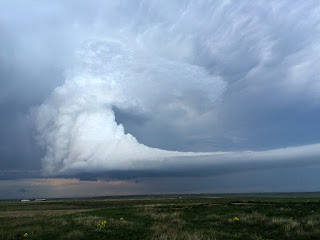 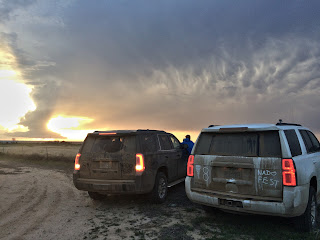 I always after a chase look into just what made this Storm so special and found some interesting answers a few weeks after the event, What I did not know at the time was the previous night a big MCS In Western Kansas had left an Outflow Boundary along the KS/CO Border and it seems this boundary headed westbound and crashed into the Simla Storm sometime around 6pm. This it seems was a crucial factor in why this storm went on to become a Cyclic Tornado producing machine. The Kansas risk did break the cap but not until about 830pm and by then the tornado risk was hugely reduced, the pay off for all the chasers camped out over there was insane Cg Lightning show with a few LP Supercells which made for the Lightning pictures of the season.

SPC Reports Page for this Day Below