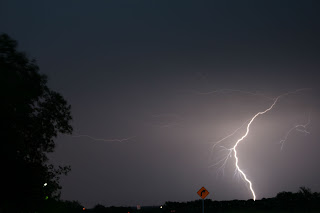 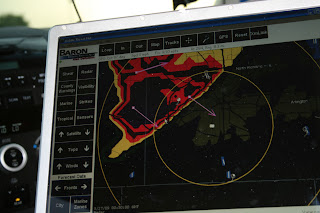 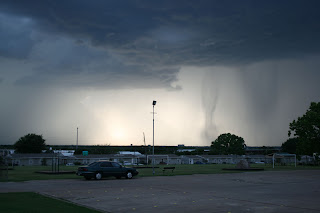 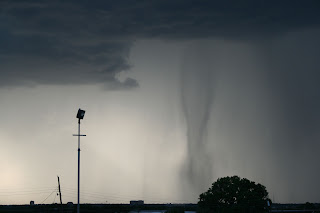 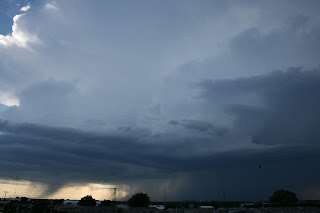 Tuesday 26th May we targeted an area from Witchita Falls to Dallas Fort Worth, SPC Had issued a Slight Risk for Supercell Storms and only 1 storm of any note went up. Temperatures had got up to 101f and Dewpoints were also very high at 75f. The Storm of the day initiated near Breckenridge and drifted slowly East, just West of DFW The storm split into 2 seperate storms with the Northern storm moving North Westwards. We had a tricky decision to make seeing as the right split was moving straight over the DFW Metroplex and at rush hour as well!! So we went to the SW Side of Dallas and got into an elevated position to watch the storm roll towards us, once again little chance of Tornadoes and Hail would be the primary threat, these storms also seemed very High Based. Ended the day by punching the Core just South of Weatherford and once again taking some Golfball Hailstones, positioned West of the Supercell at Sunset to shoot some Lightning before ending the day at Weatherford (Tx)
Pic 1 - Cg Lightning Just West of DFW
Pic 2 - Our Position looking at the SE Moving Supercell
Pic 3 & 4 - High Based Supercell with Hail Core approaching
Pic 5 - Approaching Supercell