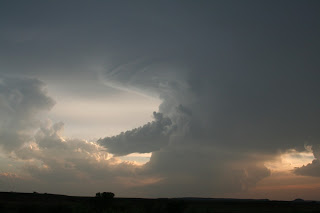 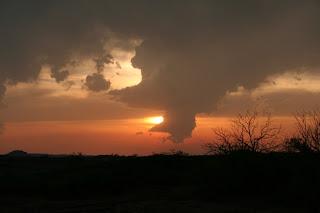 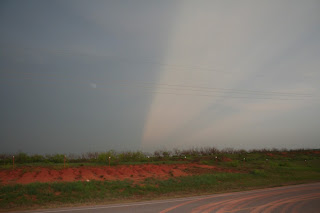 We started this day at the Big Texan in Amarillo with high hopes of something severe today with the SPC Going with a Moderate Risk across the Oklahoma Panhandle and South Western Kansas all the way up through Nebraska (A pretty big area) After lunching in Dodge City we were aware we needed to get further South and East due to us being behind the Dryline. After grabbing some Petrol in St John (Ks) a few Supercells went up near to Woodward (Ok) We blasted South and West quickly and got to the storms within an Hour. These were a pair of Fantastic looking LP Supercell storms that had earlier dropped the Cone Tornado near Woodward. Another new Supercell (That would become the Greensburg EF5) Went up about 40 miles further to the West, the Updraught on this was amazing from our position to the east. We headed back North after taking pictures of the wonderful Lp's in the Setting Sun with a view to Chase but after a Vote decided Night time Chasing would not happen as not all 6 of us wanted to chase a Now dangerous Storm at night. So we retreated to Alva to grab some dinner. As I went outside the Restaurant I knew something bad was happening to my North West, continueous Lightning and incredible inflow winds were blowing from my South East towards this storm, at a guess the winds were about 50mph and Hot! After eating we went further North to try for some Lightning pics but winds were too strong to even take a picture and the Lightning was just strobing, at points it was constant daylight. When we got back to the Hotel lines of Police, Ambulances and National Guard were streaming West towards Haviland and Greensburg.....a sobering time for our group and showing the dangers of these storms.
Pic 1 - LP Supercell Storm
Pic 2 - Sunset
Pic 3 - Anti Crep Rays
Posted by Paul at Tuesday, March 23, 2010