Started the day in Cheyenne (Wyoming) and the pick up went smoothly enough from DIA, We then had some technical issues that lasted quite a few hours and put paid to the Moderate Risk threat area over parts of NE Kansas and SE Nebraska, seeing as this was a bonus chase day we decided we would get what we could and lucked out when parameters started coming together from a lifting boundary in Eastern Colorado. After sitting about near Sterling City an MD Was issued for our secondary risk zone and after noting a very nice Storm near Limon we blasted south towards Last Chance. The storm we were watching was sitting right on the boundary and our first visual was of a very nice LP Supercell moving initially north-east. I took the decision to head southwards towards Limon as the hail core was easily 10 miles to the west of our intended road, on the journey southwards our storm became tornado warned and started turning to the right, we drove straight under the rain free base and noted some decent rotation, the main hail core was still way off to our North-West.

What happened next was very unexpected, my GRLevel 3 was showing 0.5" Hail on the SE Side of the Supercell but in the very next scan went to 4.25" and put the newly developing area of hail directly on the road in front of us, our road jogged west by 1 mile and then straight south to Limon, it would be close but we had to commit to the road to get south of the now east moving Supercell. 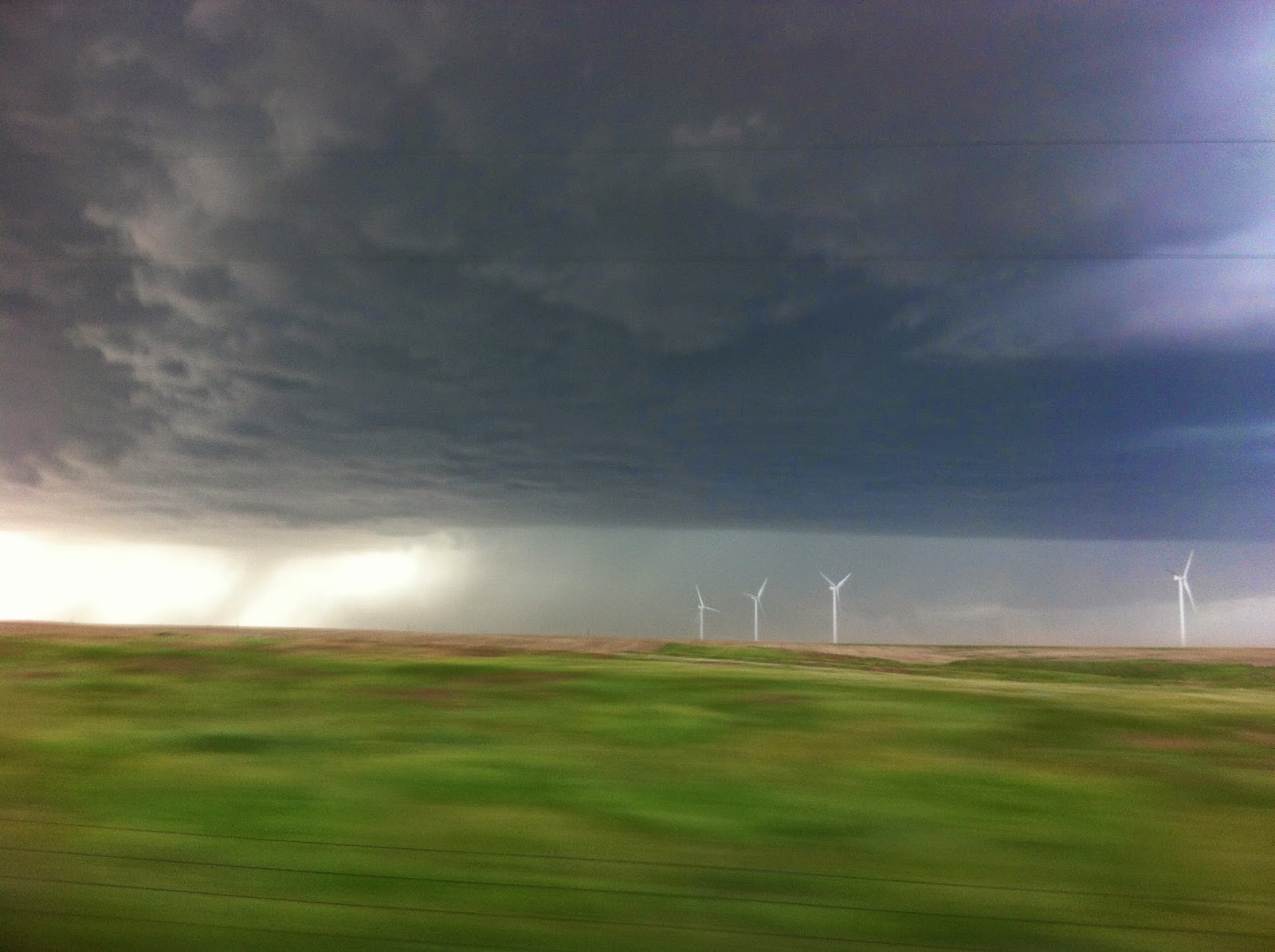 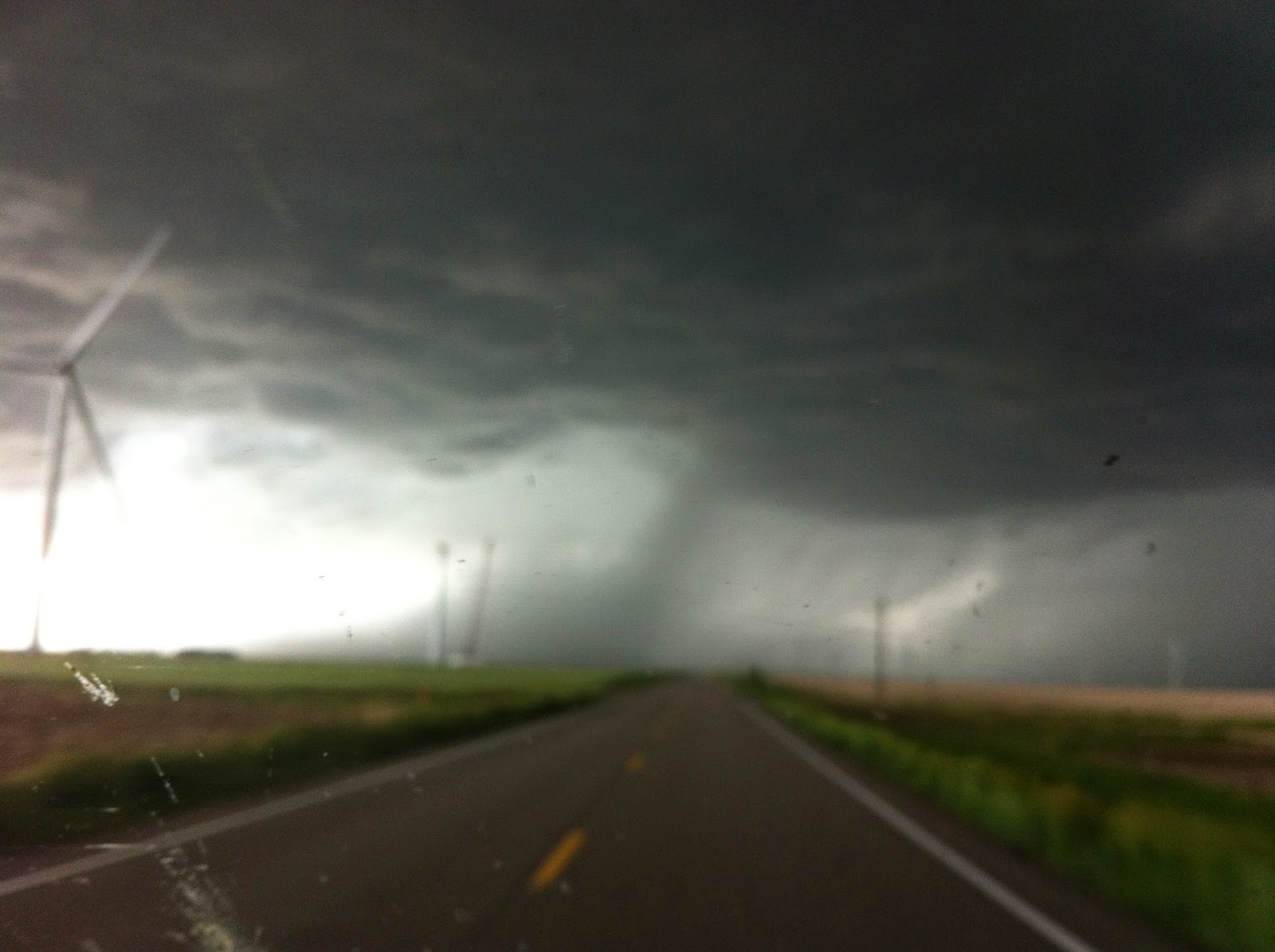 In the pictures above we also managed to picture the brief cone tornado reported with this storm, the hail core in the 2nd picture enveloped us before the road turned to the left (South) just 1 mile ahead.
Just after this picture was taken we got pounded for about 1 minute with a mixture of baseballs and softball sized hail that destroyed 1 of the cars and severly damaged the Tahoe. We stopped at Limon to survey the damage and then chased onwards eastbound towards Burlington on the I70.

The Storm after this was always outflow dominant and joined a line of other storms moving east at incredible pace, the winds associated with this line were fierce, we took cover for the night at Colby (Kansas) and let the line overtake us watching it from the hotel. 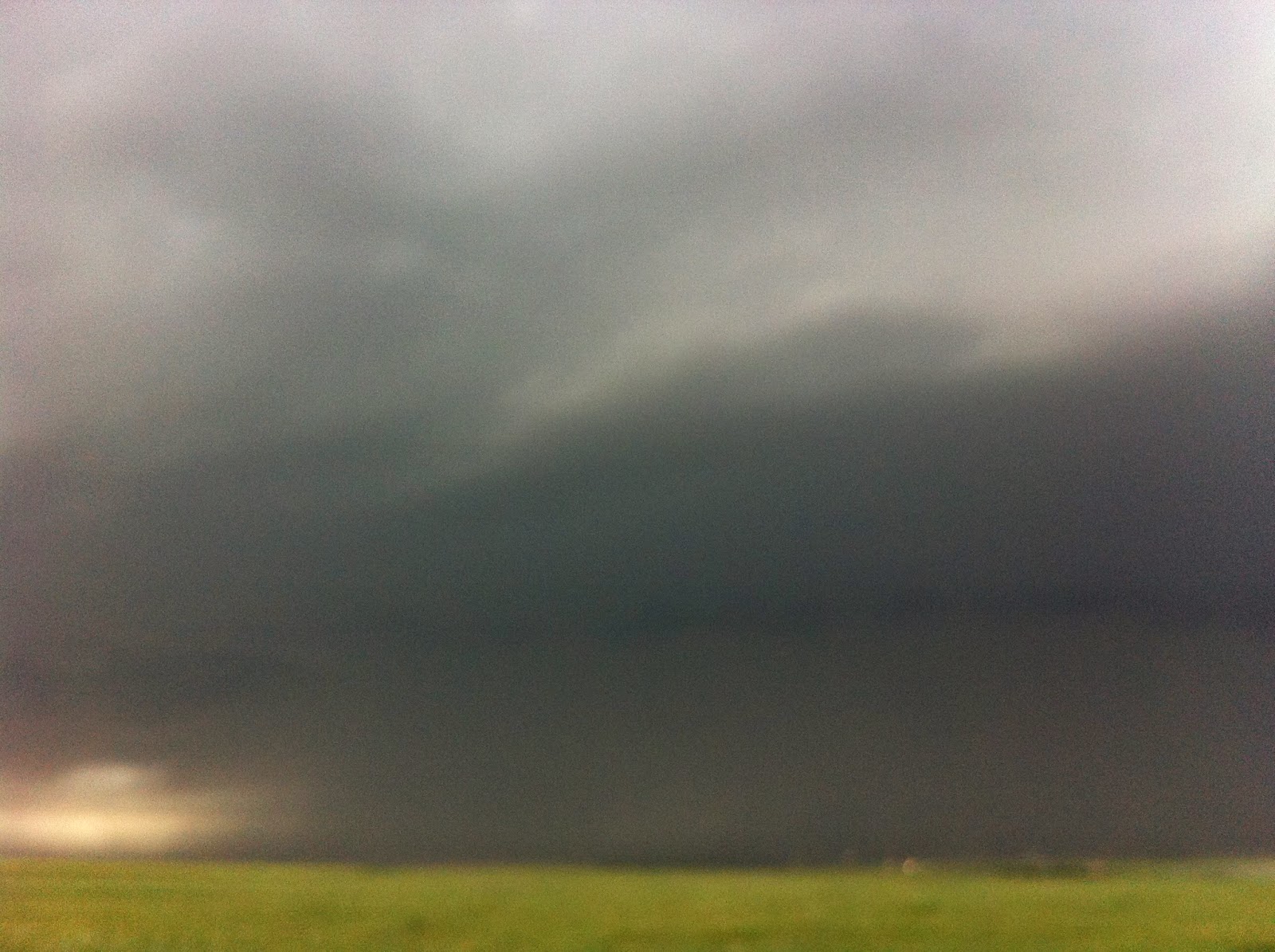 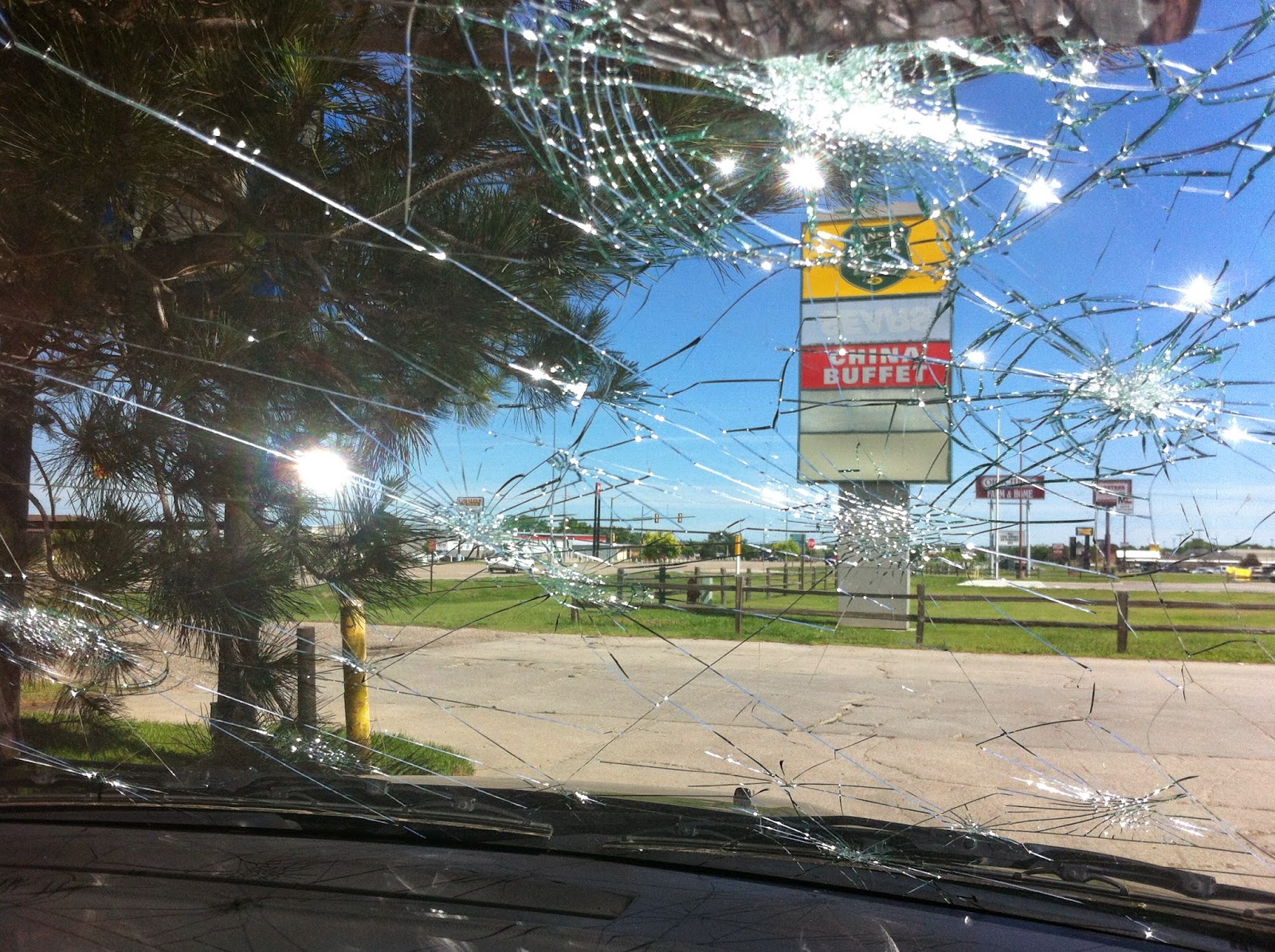 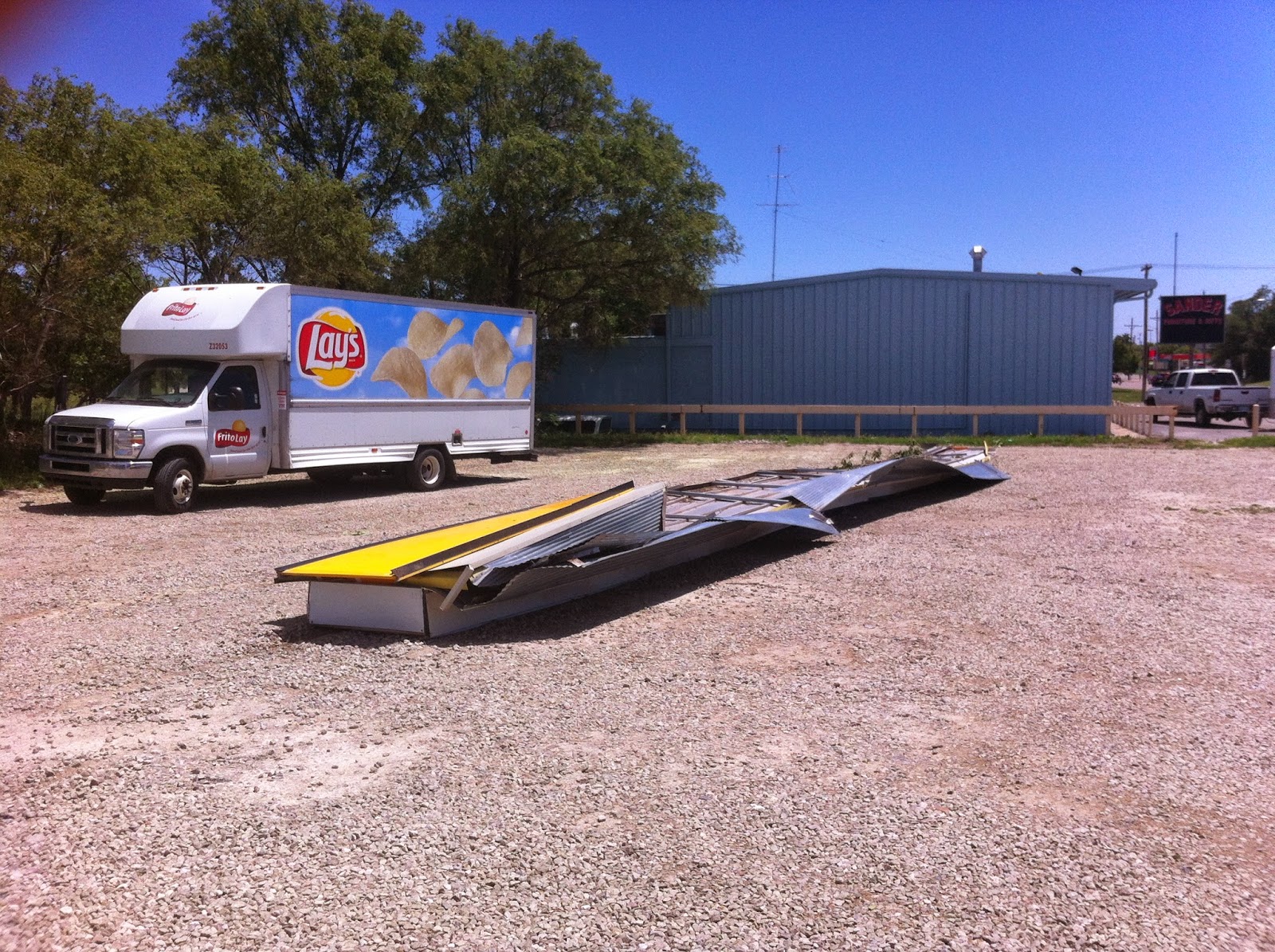 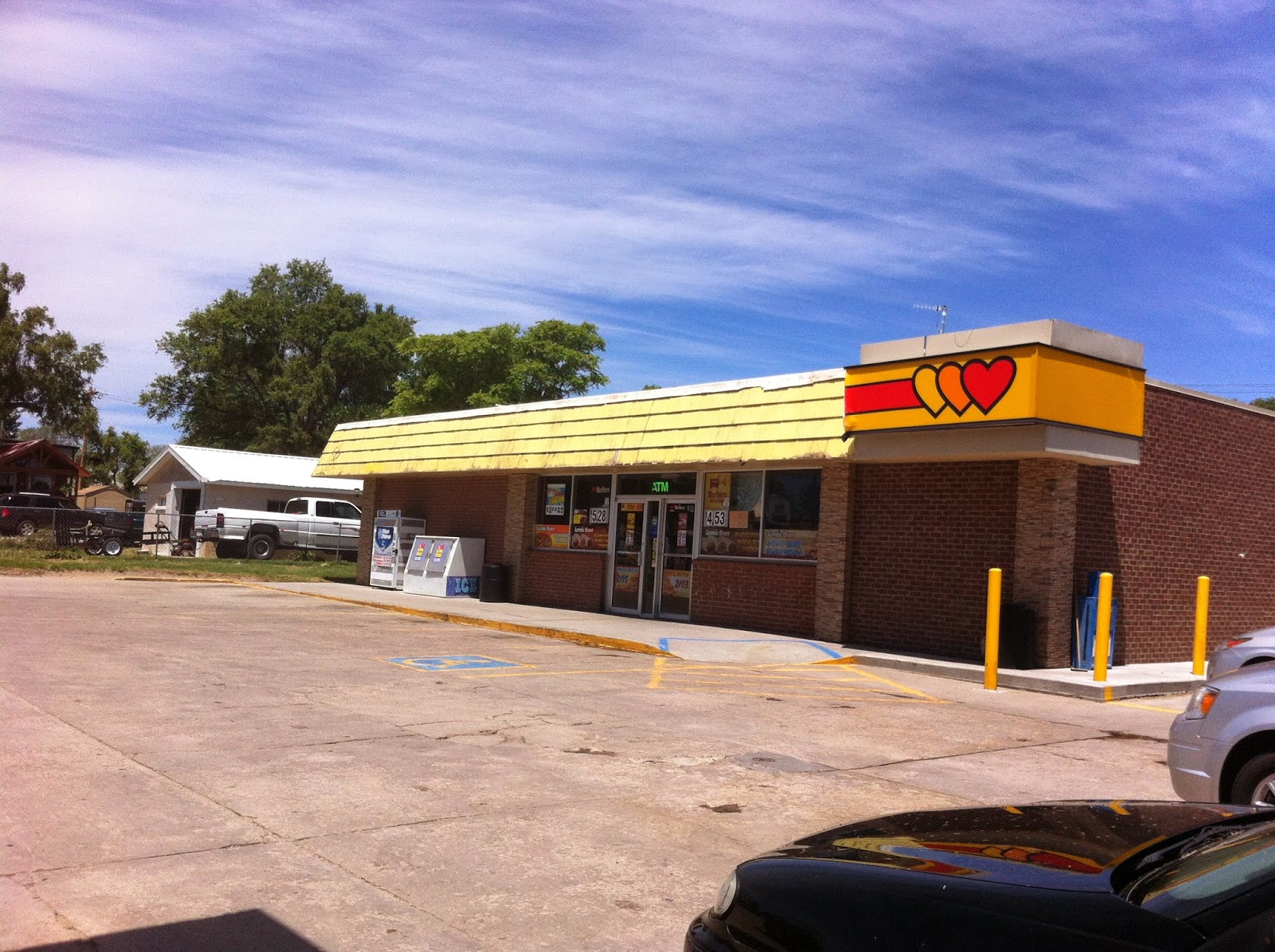 The next day was a travel day from Colby to Sioux City (Iowa) for an expected big risk for tornadoes on a moderate risk and along the way we came across some extensive damage between Interstates 70 and 80 from the days before Moderate Risk, most of this was wind damage with nearly every centre pivot irrigation system tipped over and numerous small towns trashed along the way especially Norton in Kansas pictured above.
Posted by Paul at Tuesday, July 08, 2014